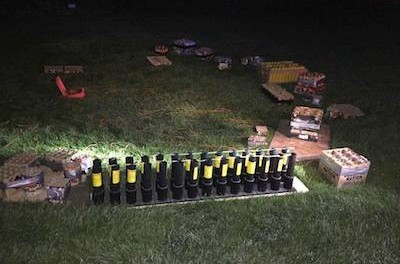 Sparta Police confiscated this array of illegal fireworks after a resident refused to listen to officers orders to dismantle it. Photo courtesy of the Sparta Police Department.

SPARTA, NJ – The investigation is continuing after a Sparta man was arrested and charged with illegal possession of fireworks early Fourth of July evening. The incident occurred after Police were called to the area of Lambert Drive to investigate a report of a large fireworks display being assembled on the front lawn of a residence.

At 9:23 pm, Officer Timothy Lynott located the residence where he observed a large fireworks display in Plain View that was erected in a semi-circle on the property of 52-year-old Bujar Xhudo’s home. The display which was extensive included more than a 100 separate explosive airborne devices that were wired into an electronic controller. 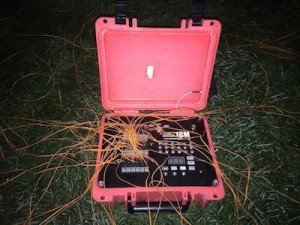 The controller that was set up to launch the fireworks. Photo courtesy of the Sparta Police Department.

The officer explained the serious safety issues to Xhudo and that he was not going to be allowed to set off his display and would have to dismantle it. Xhudo refused. Sgt. Keith Hannam arrived on scene a short time later where Xhudo again refused and indicated he intended to launch the display for a large party he was hosting. Despite being warned several times, Xhudo refused to comply with the officers lawful directions. He was then placed under arrest and transported to Police Headquarters for processing.

After consulting with the New Jersey State Police Bomb Squad Unit, Members of the Sparta Township Fire Department and Sparta Police Officers disconnected and dismantled the display and transported the fireworks by truck to the Sparta Police Department where it has been secured until the NJSTP Bomb Squad Unit arrives early next week to conduct a complete inventory and dispose of the explosives.

Xhudo has been charged with violation of; N.J.S. 21:3-2, Unlawful Possession of Fireworks. He was processed and released on his own recognizance several hours later. Xhudo has First Appearance in Sparta Municipal Court on July 9th at 8:30 am to answer the charges. Det. Jeffrey McCarrick is assisting with the investigation.