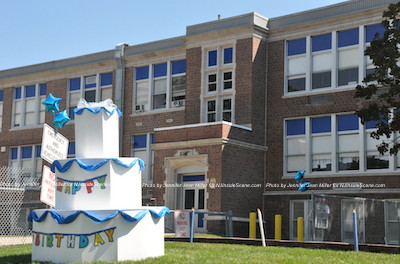 The Franklin Borough School on the day of its 100th Birthday Celebration. Photo by Jennifer Jean Miller.

FRANKLIN BOROUGH, NJ – In the same year that Woodrow Wilson was the country’s President, coming soon to a local theater by you is the latest silent film with Charlie Chaplin, and Franklin residents pay two cents to mail a letter, the Franklin Borough School opened its doors.

The motto now a century later is “100 Years Strong…And Growing.” 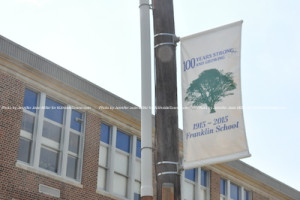 Banners commemorating the celebration in front of the school. Photo by Jennifer Jean Miller.

Local residents and area dignitaries embraced the motto with a celebration of the school’s first 100 years at the 100th Birthday Celebration on Sat. Sept. 19 at the school.

When the school opened on Mon., Sept. 13, 1915, it was then known as the Franklin Vocational School, with the purpose of becoming a school to train local children, whose parents worked in the Franklin Zinc Company, in a career. Curriculum included: wood shop (boys), machine shop (boys), cooking (girls), sewing (girls), and business (boys and girls).

The school has undergone several expansions during its days, including in 1922 (left wing) and 1926 (right wing), with the latter addition tallying to $150,000. It was in 1960 that the auditorium and gym joined the building.

Students traveled to the K through 12 institution from Ogdensburg, Jefferson, Hamburg, Hardyston, and Vernon. The high school remained in the complex until 1982, when students Wallkill Valley Regional High School then became the location for students.

Dr. Patricia Pfeil, the school’s principal, said that when she came to Franklin she had not planned to stay more than a year, but “I fell in love with the town, our school and the students.” 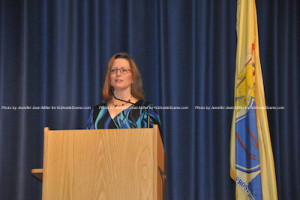 She said though the years have passed, the common thread has been the pride in the community for the school. 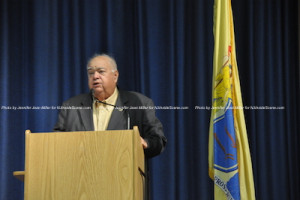 Rick Kell, the Board of Education President, praised the “thousands of students, who have passed through the school, the staff on the front line, and the teachers here to teach the students.” 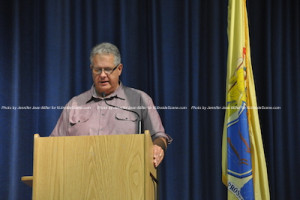 Alison Littell McHose, longtime Franklin resident, Assemblywoman and Franklin Borough Administrator, presented a proclamation congratulating the school from the Senate President and Speaker of the Assembly. 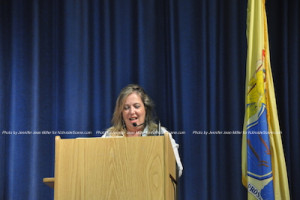 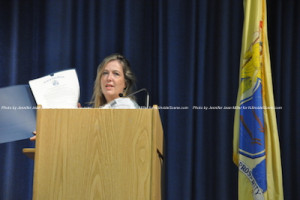 Sussex County Freeholder Director Phil Crabb, reminisced about his days as a Franklin student and graduate of the high school. He joked about the night of the auditorium dedication, which his mother and sister were involved with the ceremonies, but Crabb decided to eat mushrooms as a four-year-old in the backyard. As his mother and sister attended the ceremonies, his father took him to Franklin’s hospital, where his stomach was pumped, the doctor shaking his head at the event. 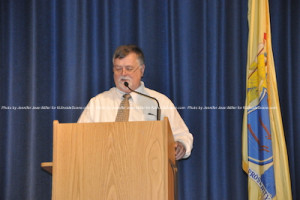 Crabb also talked about other unique memories, such as students learning times tables as ways to remedy behavioral incidents, with those learning their one and nine times tables well, he added, because they were written five times each. 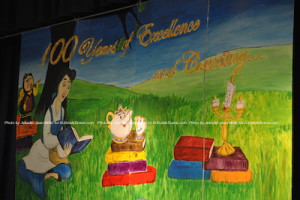 A mural at the celebration. Photo by Jennifer Jean Miller.

He was there when in 1968 the new alarm system activated, and students realized that there was something that appeared like smoke. It in fact was, due to a fire. Crabb recalled that no student was hurt, and faculty helped with the cleanup. He noted this was a way to show the dedication of those to the school.

Judy Williams, from Franklin’s Historical Society, introduced history buffs, Bob and Betty Allen, also residents, who donated a photo to the school taken in 1922. The photo had touches, which dated it, including horses and buggies. 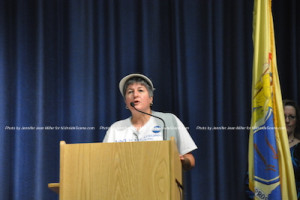 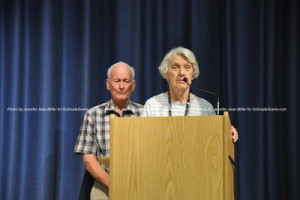 The audience enjoyed at the opening ceremony music from the Franklin Band, as well as the school’s chorus. They sang a song medley, with the first song, which was popular at the time the school opened. Singer Alice Nielsen popularized the song, “Home, Sweet, Home,” which had a line later used in the film, The Wizard of Oz, the famous, “There’s no place like home.” The Phillip Phillips’ song, “Home,” wrapped up their medley. 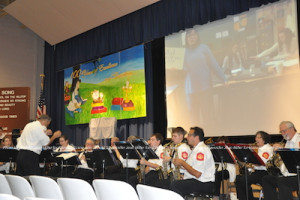 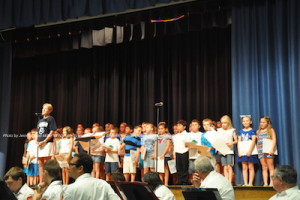 The chorus takes the stage. Photo by Jennifer Jean Miller.

Students in the chorus also sang the alma mater, encouraging audience members to sing along. Later, Franklin High School alumni rose in the back and sang it a capella, with the audience bursting into applause following the impromptu performance. 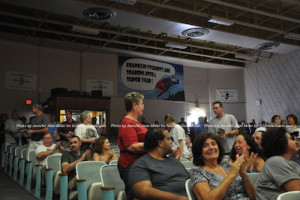 Some alumni in the auditorium who were recognized. Photo by Jennifer Jean Miller.

Turner said, “What makes the Franklin School great is the same thing that makes America great…you.” 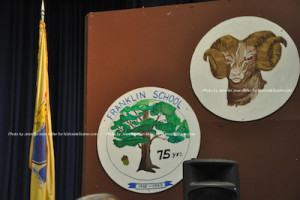 Paintings from the 75th Birthday Celebration in 1990. Photo by Jennifer Jean Miller.

He added that each person who has passed through the doors, has left a bit of themselves behind, and likewise, those who have been through the school “never really leave a place that you long.”

Pfeil compared the students to the acorns that fall from the immense oak tree in the school’s front, a symbol for the school. She said that students are amazed that an immense tree, like the school’s, which is about 300 years old, could develop into something so amazing. 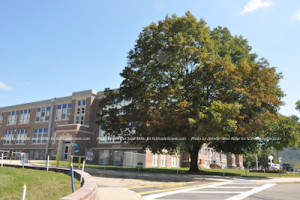 “Our little acorns,” she said as a metaphor for the students,” contain so much future.”