NEWTON, NJ – Students at Sussex County Community College (SCCC) grabbed coffee with members of the Newton Police Department on Tuesday, October 28, as part of the Coffee with a Cop program.

Coffee with a Cop is a national program through the United States Department of Justice, with similar events throughout communities, to bring together members of the community with their local police departments. 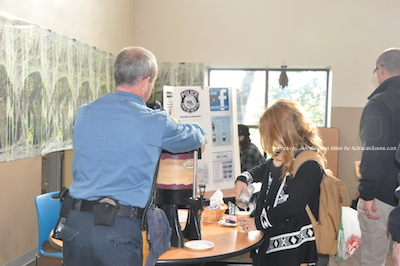 The program for the college was coined specifically as “Coffee with a Cop on Campus,” and offered the opportunity with members of the college community to meet local Newton Police Officers, ask questions, and discuss issues.

“This is a community policing program to help break down the barriers,” said John Scully, the Director of Campus Safety & Security at Sussex County Community College. “Many students only see the police as people giving out tickets or at a crime scene. This puts a human touch between the police department and the students, and creates a better community.”

Scully has been instrumental in other programs to create a safer environment at the campus, including the recent FBI Advanced Law Enforcement Rapid Response Training (ALERRT), which was an active shooter training event for local law enforcement. Click here to read the college’s press release about that event, where the college was the host site on September 9 through 11. 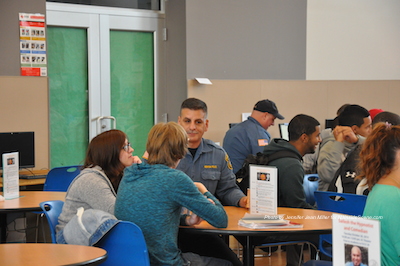 Officer Tom Tosti (left) and Ken Teets (right) mingle with students during the Coffee with a Cop on Campus event. Photo by Jennifer Jean Miller.

“All of these are incentives to keep our campus safe,” Scully added, noting that the college boasts 165 acres of property, which people from all walks of live converge on during the school year. 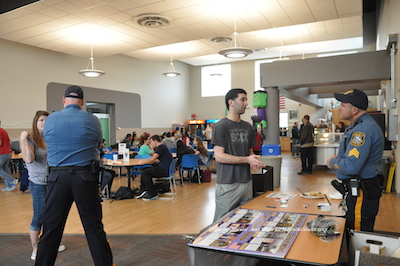 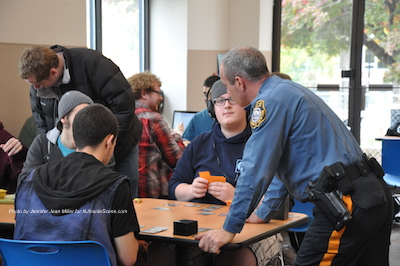 Newton Police Officer Shawn Burke visits a table of students at the Coffee with a Cop on Campus event at SCCC. Photo by Jennifer Jean Miller.

Some students were initially hesitant to speak to the officers at the start of the event. Soon, they were grabbing complimentary cups of coffee and apple strudel, and began chatting with officers. As the morning progressed, more students approached the Newton Police Department table for information about programs the department offers, including the Newton Police Department’s app, which provides crime maps, news, social media and the ability to submit anonymous tips. Click here for the iPhone app, and here for the Android phone app. 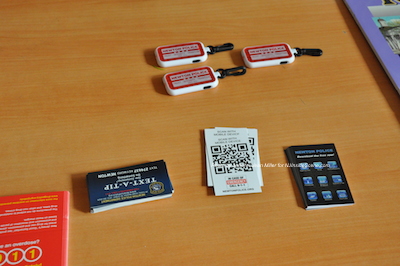 Information about the Newton Police Department Apps that were available for students to take at the event. Photo by Jennifer Jean Miller.

As SCCC students grew more comfortable with speaking to the officers, they excitedly posed for photos, sat down to enjoy a cup of coffee and conversation, and also several students enjoyed games of pool and ping pong in the student center’s game room. 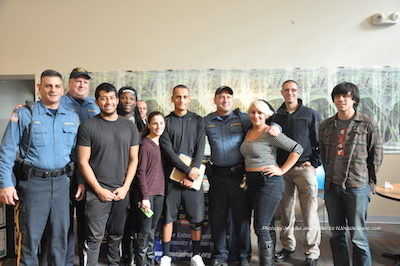 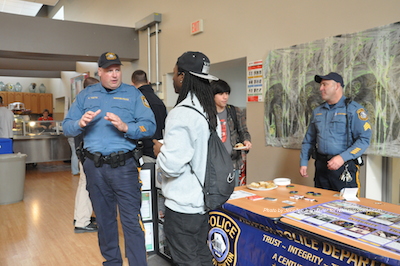 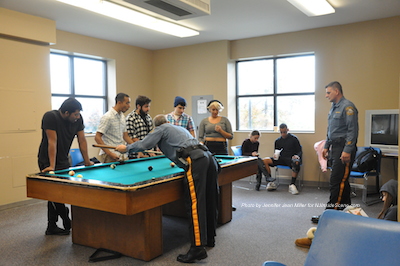 Officers Shawn Burke and Thomas Tosti shoot some pool with Sussex County Community College students at the Coffee with a Cop on Campus event. Photo by Jennifer Jean Miller.

Philhower said that many students who are in the criminal justice program also visited the table to ask how one enters the law enforcement field.

Philhower said the connection between officers and students, on a first name basis, will help students to become less intimidated about speaking to police, and reaching out to them about issues within the community. Philhower said that during the day, members of the Newton Police Department are present on campus.