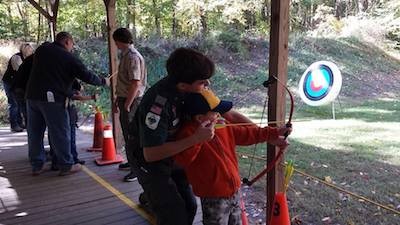 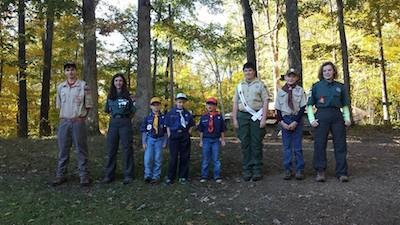 The Crew members volunteered their time to help run some of the activity stations for the young Cub Scouts. Some of the stations our crew members ran included COPE and rock climbing, fishing, science and sublimation, BB gun shooting, archery, nature hikes, and a zip line. Other activities offered throughout the camp were mountain biking and totem pole carving.

When the crew arrived Friday evening, it was muggy and rainy out, but that doesn’t stop a Boy Scout! Fellow campers treated them to a late night snack of hot dogs and French fries before Crew 276 returned to their cabin for a few rounds of Apples to Apples (a crew favorite). The next morning, the entire camp met at Voller’s Field for morning flags. Conducted by members of the crew, the American Flag was saluted and raised. Vice President of Fundraising, Christopher Rozek, played the trumpet calls, as he did all weekend. Throughout the day, programs, as afore mentioned, were run. The Cup Scouts took a particular liking to the BB gun range. At dinner time, the camp was served a fantastic spaghetti and meatball dinner, courtesy of the Mount Allamuchy staff. After dinner the camp gathered at Council Point for the evening campfire. Packs and troops had the opportunity to perform skits and sing songs for the entire camp to get involved in. 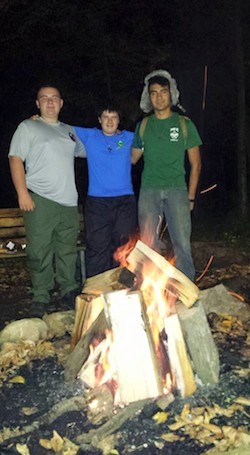 John Z., Alex M., and John U enjoying the last night and last campfire of the camporee. Image courtesy of Venture Crew 276.

It is most definitely a time of laughter and silliness. The campfire held a more serious note as the night progressed. For the second time, Crew 276 performed a flag retirement ceremony. At their previous meeting the flags were saluted and then cut up into stripes and stars. Each person present at the campfire was given a piece of the worn out flags to place on the fire and be burned until unrecognizable. Crew member Thomas Seltzer read the order of the states as they joined the Union while people filed down the aisles and placed their piece of flag in the burning fire. The next day the grommets were dug out of the ashes. 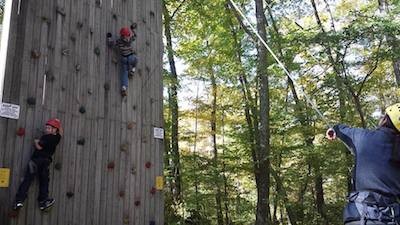 As usual, the Cup Scout Camporee was a fun and exciting experience for both the Cub Scouts and the Scouts that helped run the stations. I, personally, cannot wait to attend the Spring Camporee again in 2016. I would also like to thank the Mount Allamuchy staff for the use of their beautiful facilities and to Carlos for organizing the event.