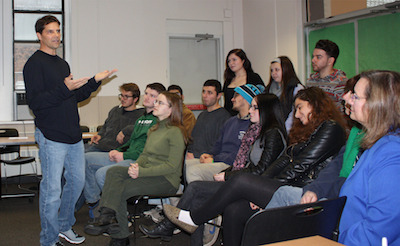 NEWTON, NJ – Sussex County Community College (SCCC) welcomed producer and assistant director, Chris Ciaffa on Wednesday, December 3. The Emmy-nominated producer stopped by campus to engage students in a conversation about the film industry and his experience becoming a producer in Hollywood.

SCCC Assistant Professor of Communication/Theater Arts, Stella Trikouros, reconnected with Chris after having taught him at Newton High School and arranged for him to meet with students from her performing arts class. Students with an interest in film, cinematography and those involved in the theater program at the college were also invited to attend.

Once on campus, Chris reminisced about having attended campus when the college was Don Bosco. He also shared that his mother was a private secretary to Father Marino who was the head of Don Bosco. Chris was excited to be back on the campus and looked back on his younger days.

Chris was a 1981 graduate of Newton High School and a graduate of Old Dominion College where he received his bachelor’s degree in business. After graduation, Chris moved out to California and began working alongside his brother-in-law, who was a producer and inspired him to pursue a career in film. He began as a personal assistant and was soon working on the set of the movie “Big Business” with Bette Midler. Chris eventually shifted his focus from assisting to producing. “I knew I had to get back into a production,” stated Chris. “I met Frank Capra who took me under his wing and allowed me to work on movies such as Oscar, Dick Tracy and Navy Seals. I started looking for projects to gain more experience, which is how I learned to make movies.” 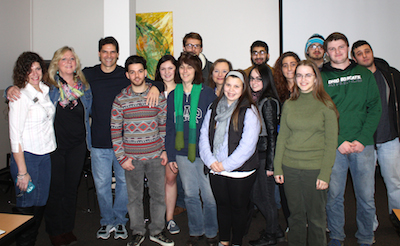 Chris noted that finding a project to make into a movie proved challenging. When looking for inspiration, he would visit the local library and scour articles in various newspapers for ideas. That was how Chris stumbled across the story for Devil’s Arithmetic. The script peaked his interest and he would later pitch the story to the executives at Showtime. This would be Chris’ first project as a producer. The movie, which starred Kirsten Dunst and Brittany Murphy, went on to earn Chris an Emmy nomination for Outstanding Children’s Special.

At the end of his discussion, Assistant Professor Trikouros gave the students the opportunity to ask questions of the Hollywood Producer. Chris gave the students suggestions, challenges and inspirations on how to break into film. “Some of the challenges of this business are to battle with the studios. You need to be able to handle rejection and move on to the next project,” Chris said.