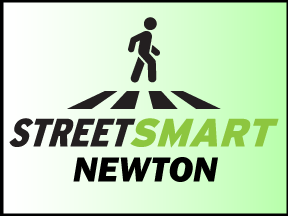 NEWTON, NJ – It seems drivers and pedestrians are getting the message in Newton. Following the roughly two month long Street Smart Newton pedestrian safety campaign this past fall, data shows that the public awareness campaign is having an impact.

In a newly released report, TransOptions outlines the successes of the Street Smart Newton campaign, highlighting an observed 34 percent reduction in mid-block crossing (jaywalking) at a sample intersection and a 21 percent decrease in cars failing to stop for pedestrians in the crosswalk, a state law that comes with a significant fine and potential for points on the violator’s license.

Street Smart Newton, which combined education and enforcement techniques, was a collaborative effort between TransOptions, the Newton Police Department, the Town of Newton, and Sussex County.

Survey responses indicate town residents have noticed a difference as well. Following the campaign, respondents reported significant decreases in observed dangerous behavior across the board, on categories such as pedestrians crossing against the signal, jaywalking, drivers not stopping for pedestrians in crosswalks, drivers speeding in areas with heavy pedestrian traffic and drivers running red lights or stop signs.

“We’re incredibly pleased with the results of what was truly a team effort,” said Newton Town Manager Thomas Russo. “I thank everyone involved in the campaign and the residents of Newton for embracing safe behaviors whether walking or driving through town.”

“Street Smart is an important program that embraces grassroots efforts within the community to not only raise awareness of dangerous behaviors, but also to change those behaviors and make our roads safer for all users. We’re very happy to have been able to have an impact in the Town of Newton,” said John F. Ciaffone, TransOptions president.

“Combining TransOptions’ in-school and community-based educational work with the police department’s high visibility enforcement and the town’s promotion and outreach yielded a very successful campaign that we hope to replicate moving forward,” he added.

Newton experienced 26 pedestrian-related crashes from January 2011 to August 2015, including one that resulted in a fatality.

“The results of the Street Smart Newton pedestrian safety campaign are clear; increased enforcement and education of both motorists and pedestrians can improve safety,” Newton Police Chief Michael Richards said.

Pledging that the safe behavior expectations will continue, Richards hoped that “this sustained effort will create a lasting improvement so that we can earn a reputation as a truly pedestrian-friendly Town.”

“Together with engineering enhancements and installation of crosswalk signal devices, I believe this goal is very achievable. Thank you to everyone who contributed to this important safety campaign,” Richards said.

The Street Smart NJ program was first piloted in 2013 and 2014 by the North Jersey Transportation Planning Authority (NJTPA) in five municipalities throughout the state. Street Smart NJ is a public education, awareness and behavioral change campaign developed by NJTPA and funded through the Highway Safety Improvement Program and the State Pedestrian Safety Education and Enforcement Fund administered by the New Jersey Division of Highway Traffic Safety (NJDHTS). The program comes as a response to New Jersey being designated a pedestrian “focus” state by the Federal Highway Administration. The state’s 2013 pedestrian fatality rate of 24.3 percent was nearly double the national average.

For more information on Street Smart, visit TransOptions.org/street-smart, or call TransOptions at (973) 267-7600. TransOptions is the transportation management association for northwest New Jersey. A non-profit organization, TransOptions delivers programs and services to improve the accessibility, mobility, environment and overall quality of life of all residents and commuters.