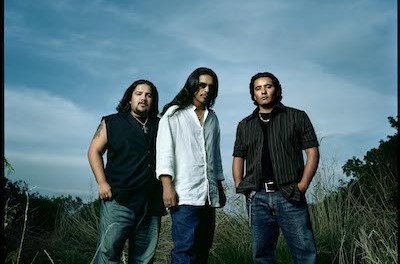 Los Lonely Boys have had a charmed career. They debuted in 2003 with a multi-chart gold single, sold millions of albums, won a Grammy, racked up reams of critical acclaim, opened for The Rolling Stones, among many other accomplishments. Brothers Henry, JoJo and Ringo Garza also played and recorded with such legends as Willie Nelson and Carlos Santana.

Los Lonely Boys have proved themselves to be one of the most stunning and wonderful musical success stories of the last decade, as they continue carving out their legend with each album. The band has already shown they can “up the ante with greater musicianship and confidence” (People) every time out. They heighten the trajectory, open up their sound, and show what flourishing maturity feels like from these veteran yet still young and burgeoning musical talents.

The trademark Los Lonely Boys genetic vocal blend is deeper, richer, more fluent and confident than ever. Their rhythms are utterly irresistible as well as flush with smart syncopation and muscular drive.

JoJo Garza, bassist and middle brother in the triumvirate, says “It’s just progress, maturation and growth. Growing up, being older, seeing the world we’re living in. It’s also touching base with home.”

Los Lonely Boys’ tale to date is already the stuff legends are made of: Playing behind their father as kids in cantinas and honky-tonks. Moving to Nashville in their teens to try to win a record deal. Returning to their native Texas, where the brothers made their bones on the club scene as a live act. Releasing their self-titled debut, which goes double platinum, and penning a #1 radio hit in Heaven.

And after twelve years of championship seasons, Los Lonely Boys enter the rock’n’roll pantheon of legendary musical artists while also remaining true to themselves. “We’re still Lonely Boys,” JoJo insists, chuckling in agreement that they are also now Los Lonely Men who have truly come of age. “We’re still family, we’re still three brothers, we’re still doing what the good Lord has blessed us with, and that’s singing and playing for people who really want to listen.”