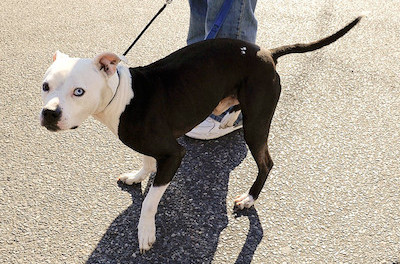 Pit Bulls are one of the main dogs that have been subject to dog fighting, which is now illegal and criminalized in New Jersey as a RICO crime. Creative commons image by Jazz Guy.

In addition to establishing dog fighting and its ringleaders as part of a crime network, it adds as RICO charge to it (Racketeer Influenced and Corrupt Organizations), making it an organized crime. RICO crimes falling under the umbrella of some other crimes including murder, gambling and kidnapping.

Kean said, “As authorities have attested and recent cases have shown, dog fighting is a barbaric crime that often extends far beyond animal murder or cruelty. Weapons and narcotics are frequently found at the scene of a fight, posing a threat to the safety and security of the community at large.”

The industry has become an unfortunate and underground profit-making venture for these ringleaders, who receive bets in the tens of thousands to watch the dogs fight. The kidnapped dogs have been starved and succumb to their fatal injuries under horrific conditions. Under the new law, those who engage in dog fighting are punished under a third-degree crime and could receive up to five years prison time and a $15,000 fine. Those who lead the network are bumped up to the second-degree crime category, may face up to 10 years in prison and could face a fine of $150,000.

Part of the legislation also offers conditions for protection of the survivors of the dog fights. That could include restitution pay for medical treatments and boarding costs to the animals who are maimed during the dog fights. There may be limitations imposed to those engaging in dog fighting to prevent them future animal ownership.

Those who engage in or ring lead dog fights may also face seizure of their property.

Kean has especially been instrumental in heading up legislation that provides further protection to animals from abuse and neglect. He was the primary sponsor behind Patrick’s Law that increased penalties for those who commit acts of animal cruelty and neglect. Patrick’s Law was named in honor of a severely emaciated and near-death Pit Bull found in a garbage bag in Newark and being launched down a garbage chute, who was nursed back to health.