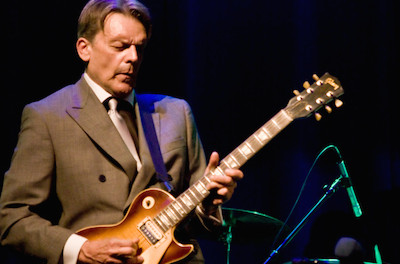 Newton, NJ – Joe Louis Walker and Jay Geils celebrate the life of B.B. King in a joyous tribute. The duo, alongside Johnny Winter’s Grammy winning guitarist Paul Nelson, will appear together at The Newton Theatre on Friday, October 30th at 8:00 pm. Tickets will go on sale to the general public on Friday, August 14th at 11:00 am.

Joe Louis Walker, a Blues Hall of Fame inductee and four-time Blues Music Award winner shares, “I was coming off a UK tour gigging 32 shows in 30 days. I was opening for B.B., and he heard me complaining. He took me aside and told me “JOE, you could have a real job at a Seven Eleven Store. But they ain’t hiring!!!!  And to this day, I never complain about ANY gig. Cause I’m privileged to be able  to do what I love, and make a bit of a living making people happy. Thanks B.B. for putting life into real perspective.”

A true powerhouse guitar virtuoso, unique singer and prolific songwriter, Walker has toured extensively throughout his career, performed at the world’s most renowned music festivals, and earned a legion of dedicated fans.  Walker’s 1986 debut album Cold Is the Night on HighTone announced his arrival in stunning fashion, and his subsequent output has only served to further establish Walker as one of the leading bluesmen on the scene.

NPR Music calls Walker “a legendary boundary-pushing icon of modern blues,” and he is referred to within the blues world as a living legend.

Jay Geils, founder and guitarist for the “band from Boston that bears his name” needs no introduction to the legion of music fans that made the J. Geils Band one of the iconic acts in the history of rock and roll. After a twenty five year career with millions of records sold, a Grammy nomination, five gold records, one double platinum record, and tours with bands like the Eagles and the Rolling Stones, the band broke up in 1985.

Following the release of two CD’s on Rounder Records and touring with the band Bluestime, Jay teamed up with award winning jazz guitarist Gerry Beaudoin in 1992. Twice their music together has been placed on the prestigious Grammy Awards ballot. They have performed with many jazz and blues luminaries including guitarists John and Bucky Pizzarelli, Howard Alden, Grammy nominated vocalist Karrin Allyson, saxophonists Scott Hamilton, Fred Lipsius and Harry Allen, and members of the Roomful of Blues horn section.