Burlum and his company have an opportunity to respond to the complaint against them within 15 days.

In the meantime, there is a nugget on the Internet about Burlum above and beyond his securities fraud already beginning in 2009, in which he is referred to as Sam Burlum. This is a Dateline expose with correspondent Chris Hansen, an undercover Dateline investigation, which Burlum has coined to others as “yellow journalism.”

On the Dateline expose, Burlum was the “mechanic” who installed a fuel device known as the Hydrogen-Assist Fuel Cell (HAFC), and was closely aligned with Dennis Lee, who was behind this device.

The HAFC on Dateline. Image courtesy of Dateline NBC.

Burlum, on the other hand, was more closely aligned with Lee and this product than he had led Dateline to believe. Click here for the article from NJ.com in 2009, where Burlum was a primary interview subject, and had already installed nearly 200 devices at the time of his interview.

On Dateline, this “mechanic” also told the media team that, “Mark [Ringen] and myself, we’re installers, trainers, tuners – and we’re also head of the HAFC research and development.

During the Dateline undercover operation, Burlum first told a person involved with Dateline who purchased the device from him, for about $1,900 cash, that their mileage had been 90 miles per gallon with the installation of the HAFC, but it was reduced to about 57 miles per gallon because four people were in the car. When Dateline revealed their cover and told Burlum they had brought the vehicle for before and after tests for mileage, and was told there was no change from the device, on camera, he told them that the government agency did not perform the same vehicle tests that he had, and that the vehicle also needed to be “retuned.” He insisted once it was retuned it would achieve the results promised.

“We’re not in business to scam people, that’s not what we do,” Burlum told Hansen during the interview.

In the undercover investigation when the Dateline team approached Burlum about having an install, he said that working with the HAFC installs was “helping the environment because the pollution goes way down, you don’t have any. Now you’re lessening your dependence on foreign oils. So you don’t have war.”

He also said the opportunity gave a “little guy,” referring to himself, a chance to navigate his own destiny.

“You’re taking the guy that was here, making it work on a day to day basis, and say(ing), ‘You’re important. Now you have a say,’ without picking up a gun. You know how monumental that is?” Burlum asked the Dateline team, with the hidden cameras rolling.

Click below for the video footage segments of Burlum’s interviews with Dateline.

After the Federal Trade Commission shut down Dennis Lee’s operation, Burlum embarked on his own venture, as a distributor and installer for the InterCharger, a device that the author of this story became familiar with because of Burlum.

The author of this story was working for another news outlet that Burlum was an advertiser on, and interviewed people who he suggested she speak to about the InterCharger.

Later, Burlum insisted one of these devices be installed in the author’s vehicle, but under its later name, the Smart Emissions Reducer (SER). The author, instead of seeing a positive change in fuel economy from this device, saw a decline, as well as in performance. Later, the author had battery draining issues with her vehicle requiring jump starts on the road, which ceased after removal of the device. Extreme Energy Solutions never contacted the author for follow up maintenance on her vehicle with her device in it, and one day in January 2014, long after the author was out of touch with Burlum for close to one year, the vehicle would not start. Upon opening the engine, the SER had blown off of the hose to which it was connected and was free floating from the hose in the engine. The author was required to seek mechanical assistance to remove the SER and have the hose reattached.

Below are pictures of both the InterCharger and the Smart Emissions Reducer featured side-by-side. The SER was the one from the author’s engine. The InterCharger in the photo was furnished to the author of this story when she began her investigation into Burlum approximately a year and a half ago, from a person who was also victimized by the claims about the device’s performance. Note the brown liquid in and on the plastic underneath the devices, which more than two years after install, is still expelling itself from the device that was in the author’s vehicle. 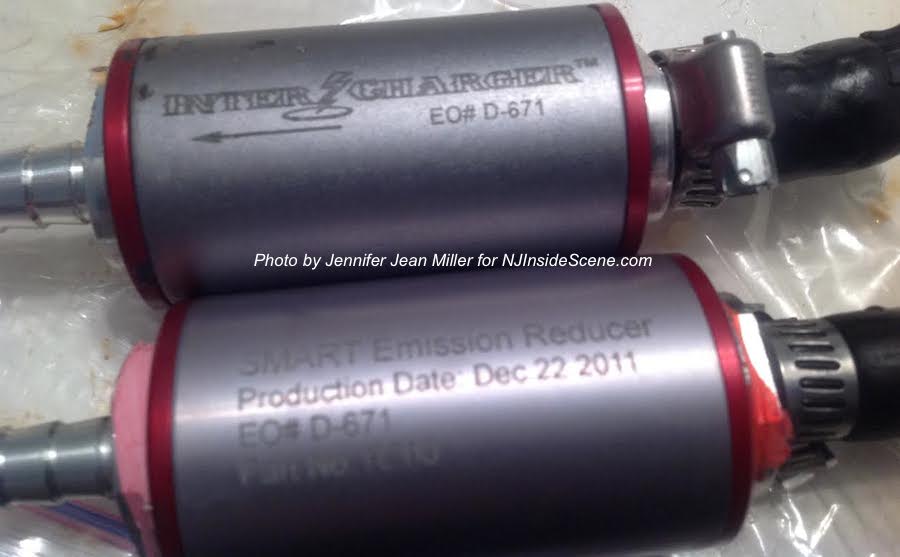 An InterCharger and a Smart Emissions Reducer. Photo by Jennifer Jean Miller.

On March 20, 2012, Intercharger USA fully changed its name to Smart Air Fuel Saver LLC. Click here to view the document. There was a change of address for the company to 141 East Central Avenue, Winter Haven, FL 33880. The registered agent for this new entity was listed as Phillip Castleberg, a member of the Extreme Energy Solutions Board of Directors, who according to the company website, is also currently the Extreme Energy Solutions’ Board Treasurer and handles Business Development. Managing Members on the document show again Palsgraf, Kaemmer, Ferro, and now Castleberg and Burlum added to the picture.

Click here for the Annual Report filed with Castleberg’s and Burlum’s names from February 7, 2013.

Click here for the annual report filed on March 19, 2014, filed once again by Castleberg and Burlum.

As can be seen in the photo of the two devices the author has included in this story, the names of the devices have changed. The EO# D-671 is the same on both, and the devices appear to look identical.

“The documentation supplied did not satisfy BBB’s inquiry and the company was unwilling to modify its web site, per BBB’s request,” the company wrote.

Editor’s Note: This is the first in a series of stories on this topic planned from Jennifer Jean Miller and NJInsideScene.com. The author of this story has already been engaged against Burlum through legal channels because of situations that arose in a media business that he enlisted her in. When her legal counsel contacted Burlum in April 2013, he failed to respond. The purpose of this article series is intended to assist and educate others about the fraud she and others have experienced, in hopes that other victims will surface and that consumers will be alert to types of fraud including those of deception – and that those seeking to commit fraud may be deterred.