WAS BAIL SOUGHT:  No

ANY OTHER INFORMATION: A person was walking on Michigan Trail when they saw a vehicle with two males in it parked on the side of the road. When the males looked up they stopped what they were doing and turned off their interior light. (YES THIS IS SUSPICIOUS! GOOD CALL ON THE COMPLAINANT’S PART). When Officer Bianculli arrived he walked up to the vehicle and could immediately smell the odor of raw marijuana from within the vehicle.  He told the occupants this and they handed over a mason jar with marijuana in it.  A later search of the vehicle produced another mason jar that contained a bag of marijuana and a metal grinder. Both of the males occupants were arrested and charged as follows:

– Driver: Victor Cotto, Age: 18 of Arthur Road Hopatcong (picture with dark hair and green/tan outer shirt) charged with Possession of Marijuana, Possession of Paraphernalia and Possession of CDS in a motor vehicle 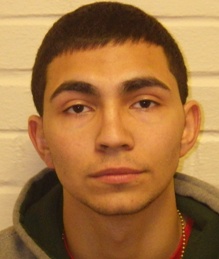 Both were taken to headquarters, processed, charged and later released.

This is a great example of being the eyes and ears for your Police Department.  By calling in suspicious activity you keep your neighborhood safe.