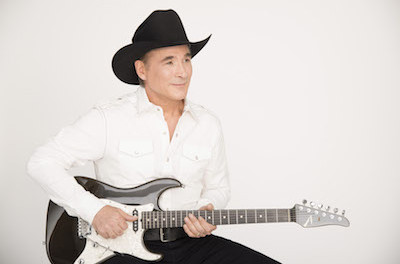 NEWTON, NJ  – The Newton Theatre welcomes country mega-star Clint Black on Thursday, March 3, 2016 at 8:00 pm. Tickets will go on sale to the general public on Friday, November 20th at 11:00 am. Clint will deliver a searing performance with a full band and all the hits!

Prolific singer-songwriter Clint Black has long been heralded as one of Country music’s brightest stars. His many talents have taken him even further, as Black has transcended genres to become one of the most successful artists in all the music benchmark in any artist’s career and has had more than 20 million albums sold worldwide.

Black’s continued success can be attributed, in part, to his deep sense of Country music history, and his humble gratitude in being an important part of it. The 1989 debut of his critically acclaimed fan favorite, the triple -platinum Killin’ Time, marked a shift in the industry, with a return to more traditional sounds of the genre. CMT lists this album as one of the 100 Greatest Albums in Country Music. Released while Black was still an unknown Texas-based artist and writer, Killin’ Time boasted five #1 hits – unprecedented from a debut album in any genre – and won Black a collection of awards that included: Country Music Association Horizon Award, CMA Male Vocalist of the Year, American Music Awards Favorite New Male Country Artist, Academy of Country Music Best New Male Vocalist, ACM Best Male Vocalist, ACM Album of the Year (Killin’ Time), and ACM Single of the Year (A Better Man).

For Black, Killin’ Time was only the beginning. Put Yourself in My Shoes followed in 1990, and quickly went triple-platinum. Since then, Black has had nearly two dozen #1 hit singles, and many Top 5 and Top 10 hits – all of them his original compositions, which is a notable rarity in popular music. The overall number of his awards, including a star on the Hollywood Walk of Fame, surpasses the number of his hit records. He has performed for a staggering number of dedicated fans throughout the years.

With such a long and productive career, Black still keeps his output as fresh now as when he was a hungry, up-and-coming artist. In the late ‘90s, Black took a brave risk and shook things up by leaving his label of more than a decade, and took a much-needed break to reevaluate where he wanted to take his career next. At that time, he and wife Lisa Hartman Black started a family, and the birth of daughter Lily Pearl gave Black a new perspective and vigor that affected not only his personal life, but his professional and creative sides as well.

In 2003, Black boldly founded Equity Music Group, an especially artist-friendly record company that became home to his own recordings, as well as those of other like-minded artists. It was this company that launched Little Big Town’s career with their platinum-selling album, The Road to Here. Black’s highly anticipated debut album for the label, Spend My Time, received great critical acclaim.

Without a doubt, Clint Black has earned his place as one of the most successful artists in the history of American music; but he has not stopped there. Black memorably flexed his acting chops with a cameo in 1994’s Maverick (alongside Mel Gibson and Jodie Foster), as well as with roles in films such as 2000’s Going Home (with Jason Robards) and the starring roles in 1998’s Still Holding On: The Legend of Cadillac Jack, Flicka 2 (with Patrick Warburton), and Flicka, Country Pride (co-starring his wife Lisa Hartman Black and daughter Lily Black), released in 2012.

In addition to his established business ventures and various charity foundation efforts, Black branched out even further with an appearance on hit reality series Celebrity Apprentice. As a result of his friendship with fellow contestant and Olympic Gold Medalist Scott Hamilton, the two are working to secure one million dollars in matching fund donations for the International Rett Syndrome Foundation (IRSF). Black currently serves as Honorary Chair for the IRSF’s “Research to Reality: Funding Progress” campaign, which helps to accelerate treatments and research to find a cure for the developmental disorder.