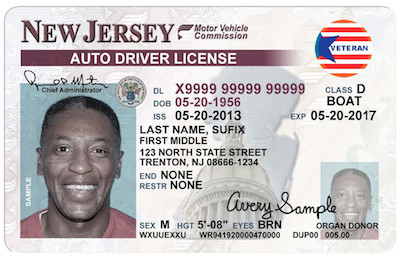 The veterans designation now available for veterans who provide proof for their New Jersey Drivers Licenses. Image courtesy of the NJMVC.

Senator Steven Oroho (R-24) spearheaded the legislation with Senator Jim Whelan (D-2), which streamlines a veteran’s ability to use their county veterans’ card to obtain the designation on their license under Senate Bill S2508.

The bill enables anyone who had been a member of the United States Armed Forces with an honorable discharge and “satisfactory proof” (either a DD-214 or county veteran identification card) to have this status denoted on their drivers’ license.

If a veteran has obtained a county card, he or she has furnished to the county the proof already with their discharge paperwork, most commonly the DD-214.

This bill enables the veteran identification card to be a satisfactory form of identification that the New Jersey Motor Vehicle Commission will accept as proof of a veteran’s service for designation on their driver’s license if only the DD-214 was used to obtain the county card.

The New Jersey Motor Vehicle Commission has currently permitted veterans to receive designation on their licenses beginning on March 1. Veterans can presently receive stickers by bringing in the DD-214 or DD-215, along with their driver’s license (or non-driver identification card) that can be adhered to the license.

Veterans are not only able to receive discounts in designated locations throughout the state, with many businesses and other locations recognizing veterans and thank them as a result.

One Sussex County business that is “veteran friendly” is The Table in Newton, which has a special “Cup of Joe for GI Joe.” Vangie Rochelle’s shop is decorated with red, white and blue coffee cups to commemorate the cups of coffee given out to veterans, some with special messages to the veterans for their service.

Rochelle said that the offer, which started around Memorial Day, will be perpetual because veterans serve year round and daily.

Oroho recognized the greatest impact of the notation on one’s license.

“This special designation on a driver’s license is a well-deserved symbol of patriotism, heroism and sacrifice,” he said. “Now that legislation has been signed into law I hope more veterans will seek out this worthy distinction on their license and be able to receive the recognition and appreciation they have earned.”