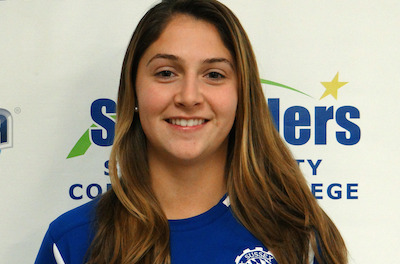 The National Association for Girls and Women in Sport in conjunction with Sussex County Community College has selected Alexandra Tczap as SCCC’s Woman of the Year for 2014. Tczap, a graduate of Kittatinny High School, competed for the SCCC Women’s Soccer team for two seasons and was named team captain during her second season. This past season, Tczap was named to the 2014 NJCAA Division I Women’s Soccer All-GSAC First Team, as well as the 2014 NJCAA Division I Women’s Soccer All-Region Second Team. Currently, Alex is on pace to become a NJCAA Academic All-American and is a member of Phi Theta Kappa as well. Alexandra will attend a luncheon on February 1, 2015 at Seton Hall University and be recognized for this accomplishment at halftime of the St. Johns vs Seton Hall women’s basketball game that same day.