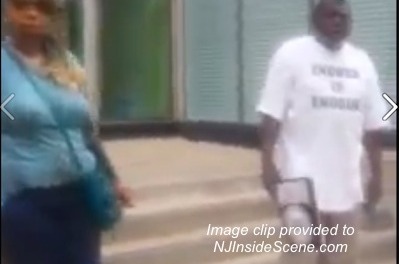 NEW YORK – A retired police officer and NJ Inside Scene reader received an unprovoked threat while walking the streets of Staten Island on Monday, September 29.

Michael Burke retired from the New York City Police Department (NYPD) in 2002, after having served on the force from 1987. He moved to Staten Island from New Jersey in 1987 when he joined the department, and then following his retirement, moved from Staten Island to across the border from NJ Inside Scene’s main reading area to Pennsylvania.

On Monday, Burke, who was tending to business near the courthouse area in Staten Island, noticed reporters and cameras surrounding a group on Stuyvesant Place. When he exited from his errand, he noticed the press was gone, and decided to record the group’s activities but did so casually. Burke began walking straight ahead as he held his phone up and against himself, but not towards protestors. None of the protestors knew he was recording.

“In no way was I looking to make confrontation,” said Burke. “They had no idea that I had my camera on.”

Burke was simply looking to capture audio of the protest.

A female is heard in the background on Burke’s video asking, as approaching the protestors, what they were chanting.

As Burke passed by, however, a man, who is visible on the video, noticed an embroidered police shield on Burke’s shirt. The shirt was in memory of slain Jersey City Police Detective Melvin Santiago, who was murdered on July 13 when his car was ambushed with bullets, and Santiago took a shot to the head. Santiago’s death is still a raw subject for the police community. Santiago’s information was not prominent on Burke’s shirt, but it was the badge embroidered into the shirt that caught the protestors’ eyes.

Once Burke was slightly past the one male protestor, that protestor switched his chant to, “Kill a cop.”

Then one of the females yelled, “Kill a cop.”

As Burke passed, he filmed the protestors coming from behind the barricaded area where they had protested, to the sidewalk, and they all continued to yell, “Kill a cop,” now facing Burke on the sidewalk. 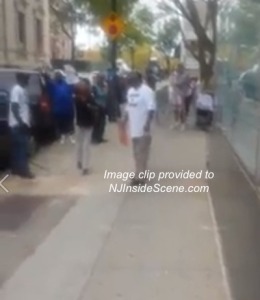 Protestors confront Burke from the sidewalk in this screenshot from the video. Image provided.

A female voice near Burke repeated, “That’s nice,” in reply to the protestors, several times as she walked from the scene.

The protestors continued their tirade at Burke.

The protestors stopped yelling “Kill a Cop,” though some still shook their fists at Burke, and continued their initial chant.

Eventually, one protestor redirected another protestor back and away from Burke after they had initially pursued him. 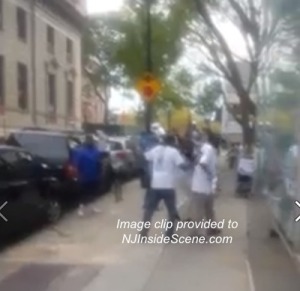 One protestor redirects another in this screenshot from the video. Image provided.

Tension has continued on Staten Island since the death of Eric Garner on July 17. Garner died when he was arrested after illegally selling cigarettes. It was not Garner’s first offense, and he had an extensive rap sheet. In the process of his arrest, Garner accidentally died, and some have argued he died from a chokehold. Garner resisted arrest, and others have argued his arrest was a result of that. Many versed in wrestling, and who have knowledge of chokeholds, have said it was not a chokehold applied and that Garner died from an asthma attack. Garner repeated, “I can’t breathe,” which officers have commented in forums around the country, can be a comment from someone being arrested to resist arrest. Additionally, others have noted, had Garner truly been unable to breathe, he would have been unable to speak. A witness who videotaped the arrest was later arrested himself for an unlawful weapons possession charge, and had a previous similar charge.

Burke recognized Garner was a man with a family, and he said that had Garner not resisted arrest, there would have not been an issue for him.

After Burke’s dealings with the protestors he shared his video on social media, and it has since received over 50,000 views.

Some have argued there with Burke’s referring to the protestors as “animals.”

“It’s a public street,” said Burke. “I’m doing nothing wrong. It’s animalistic and savage behavior,” he said of their yelling at him and chanting, “Kill a cop,” as he passed by.

Burke explained his terminology of “animal” with an example, that when a person robs someone, they are considered a criminal. However, if the person robs another, and in the process knocks them down and kicks them in the teeth, “You’re an animal,” he said.

He considered the protestors, who are protesting against what they see as the wrongful death of Garner, as behaving in an animalistic manner by then condoning the killing of a police officer.

Many have supported Burke’s statements through the shares of his video. Some who have shared it have accused him of baiting, which he countered.

“They [the protestors] didn’t know they were being recorded,” Burke said.

“Did I entice them he asked?” stating he had no knowledge when he picked out that particular shirt at 5 a.m. in Pennsylvania, that he would run into an angry group of protestors later in the day.

He has also condemned those who have attacked the protestors on his video, including one person who shared it, and made comments that the protestors were welfare recipients.

“That person’s an idiot too,” Burke said about the critical comment made about the protestors.

“People pick a side, and it is what it is,” Burke said.

Burke said the protestors were surprised by his replies, and were seeking to receive a scare reaction from Burke.

“It wasn’t the reaction they expected it to be,” Burke said.

Burke shared his video because he wanted the public to see a side not often shown by the media, which are the attacks on law enforcement.

“Guess what is coming to a neighborhood by you, until good people stand up?” Burke asked, referring to anti-police protests and sentiments.