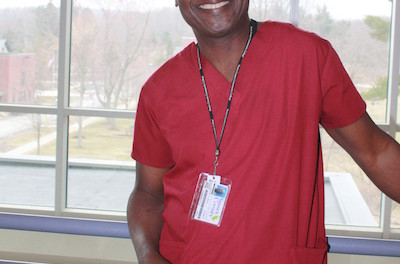 NEWTON  – Muftau Alabi Bello was desperate. Out of work, in financial trouble, and wondering what would be next for him and his family. For someone over 50, these were serious questions that needed answers sooner rather than later.

An email exchange in April 2014 began a sequence of events that will culminate with Bello receiving his certificate as a Certified Surgical Technician from Sussex County Community College this coming May.

For years Bello had been dutifully employed and he and his family enjoyed a comfortable life. But tough times came and the struggle began. Thanks to SCCC, Bello is confident that his life has turned the corner.

Now 54, Bello was raised in Nigeria and Ivory Coast in West Africa. He came to the United States in 1982 and attended and graduated from St. Louis University in 1987. He became a U.S. citizen in 1993 and served both in the United States Naval Reserve as well as the United States Air Force Reserve for a total of 10 years.

His “new life” started with a simple email. And then Bello followed up.

“An appointment was set for me to see Gail Roffe, MSW (Site Coordinator, Health Professions Opportunity Grant Program),” he said. “She showed and explained to me all the available Allied Health Science Programs that were offered. I was then interviewed by Lillian Louglas, A.S, CST (Program Director, Lead Coordinator Surgical Technology Program).”

Bello decided on the Surgical Technician program at SCCC after considering several options. The time and effort spent on him in the early stages did not go unnoticed.

“My sincere thanks to the staff and Sussex County Community College as a whole for giving someone like me an opportunity to get back on my feet to earn a living to support myself and family with a great education and financial assistance,” Bello said. “And of course, allowing me to now be a productive part of the society again.”

Bello’s experience has been such a good one, that his son, Henry Larios, has followed suit. He is currently attending SCCC and looking to graduate in the Allied Health Science with an Associate Degree as a Registered Nurse.

How does Bello feel about his impending graduation?

“I will feel like a million dollars!” he said with a big smile.