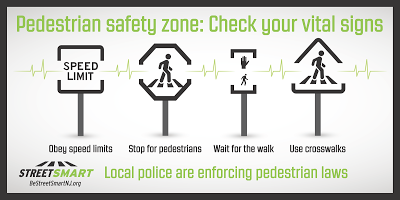 On Wednesday April 1, 2015 at 5 PM, Newton Police received a 9-1-1 call reporting that a pedestrian had been struck by a vehicle on Water Street (Route 206) near the intersection of East Clinton Street.

Officers responded, conducted an investigation and determined that a 2002 Chevrolet pickup truck being driven by Mark Walsh, a 44 year old resident of Barryville, NY, struck a pedestrian while she was in the crosswalk.  Walsh was turning left from East Clinton Street to Route 206 southbound.  The pedestrian, identified as Yessica Utrera, a 31 year old resident of Newton, was crossing the highway within the crosswalk from the southbound side toward the northbound side of Water Street.  The passenger side mirror of Walsh’s vehicle struck Utrera’s left hand, causing minor injury for which she was transported to the Newton Medical Center for treatment.

Ptl. Shawn Burke issued Walsh a summons for NJSA 39:4-36 Failure to Stop for a Pedestrian crossing within a crosswalk.  Sgt. Scott King and Ptl. Jose Morales assisted at the scene.  The matter is pending Municipal Court.

Visit http://bestreetsmartnj.org/laws/ to learn more about laws for pedestrian safety.