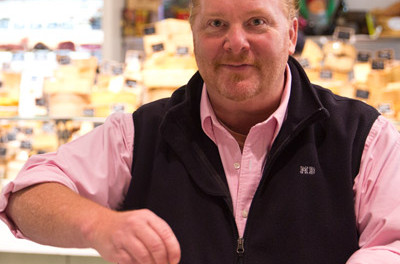 World famous chef Mario Batali will be at the Newton Medical Center benefit "An Evening of Wine & Roses" on Thursday, May 29. Photo courtesy of Atlantic Health System.

NEWTON, NJ –  World-renowned celebrity chef, author and television star Mario Batali will appear as the featured guest at this year’s “An Evening of Wine and Roses,” the annual fundraiser benefitting Newton Medical Center, on Thursday, May 29, 2014, from 5:30pm to 9:30pm at Centenary College’s David and Carol Lackland Center, 715 Grand Avenue, Hackettstown.

The event each year draws hundreds of guests to sample wines and culinary delights from some of the finest restaurants and wineries throughout north and western New Jersey. At this year’s event, Chef Batali will meet with guests at 5:30pm in a special VIP Room appearance made possible by RoNetco Supermarkets, Inc., and Wakefern Food Corporation.

“Mario Batali is one of the most recognized chefs in the world not only for his amazing talents with food, but also his extraordinary personality,” said Megan Sandow, chief development officer for the Newton Medical Center Foundation. “Given his philosophy to use the best local ingredients, we are honored to have him as our guest as we showcase the best local cuisine of the region.”

A Seattle native and graduate of Rutgers University, Mario Batali honed his culinary talents in London and Italy before returning to the United States to incorporate those skills in the New York restaurant scene. In 1998, Mario teamed up with Joe Bastianich to open Babbo Ristorante e Enoteca on Waverly Place in New York. Since then, he has opened many more restaurants and businesses throughout the world, including 10 restaurants and two Italian markets in New York.

Mario has become a recognized star on numerous television shows, such as Food Network’s Iron Chef America, and has made regular appearances on Good Morning America and the Late Show with Jimmy Fallon. In 2011, Mario and co-hosts Carla Hall, Clinton Kelly, Daphne Oz, and Michael Symon launched The Chew, a daytime talk show on ABC that celebrates and explores life through food.

Community members are also invited to purchase 50/50 raffle tickets for a cash prize of $50,000.

Newton Medical Center, part of Atlantic Health System, was ranked the top hospital in the state for hospitals with fewer than 350 beds by Castle Connolly Medical Ltd., a national health care research and information company. These rankings were published in Inside Jersey magazine’s April 2014 issue.

Tickets to this year’s event are $125 per person. VIP tickets to meet Mario Batali can be purchased for $225 each or $375 per couple. To make a donation or to order tickets from Newton Medical Center, call (973) 579-8309 or visit www.atlanticheath.org/newton.