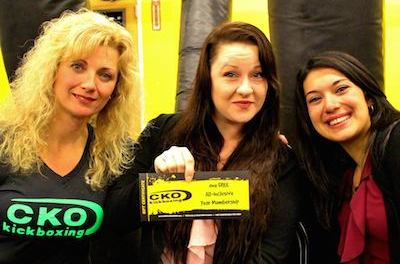 Darlene Pallay of CKO Franklin and Augusta (left) with Stacy Yurchak (right) present Sarah Schmidt with an all-inclusive one-year membership as part of the CKO Gives Back program. Photo by Jennifer Jean Miller.

FRANKLIN, NJ – CKO of Franklin and Augusta recently announced the winner of the CKO Gives Back Free Year Contest and they chose Sarah Schmidt for the one-year unlimited membership.

CKO asked for nominations for the membership to give to a non-member, explaining in 500 words or less why a particular person is worthy of a membership.

“I nominated Sarah because I watched her go through so many hard things in the past couple of years,” said friend Stacy Yurchak, who nominated Schmidt, ”and she’s just handled everything phenomenally, where most people have broken down she was the strong person.”

Schmidt lost both parents within this year, as well as one of her grandparents, while starting a new full-time job and moving into her own residence.

“I feel she forgot about herself,” Yurchak added. “She was so busy doing everything else for everybody, and was trying to get her life in place.”

Five anonymous CKO members, as well as judges for the contest, voted unanimously for Schmidt.

Schmidt, who has been participating in CKO’s programs, including the most recent Fall Into Fitness Challenge, said she appreciated the motivation she received from participating with CKO.

“It’s not a drill instructor, it’s a motivational instructor,” said Schmidt of the encouragement she has been receiving from CKO.

Schmidt was enthralled to her learn of winning the contest, as she received the news from both Yurchak and Darlene Pallay, who oversees both CKO Franklin and CKO Augusta.