HOPE, NJ – On August 6, 1954 the Land of Make Believe, previously a dairy farm that Hermann and Marie Maier owned, came to life with a hayride as one of its first rides. They envisioned a place that would allow parent and child participation together. 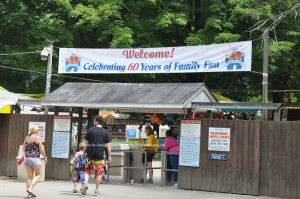 The entry to Land of Make Believe with the celebratory banner. Photo by Jennifer Jean Miller.

Over the years, it has grown to be known as “New Jersey’s Premier Family Water Park and Amusement Park,” and has been the winner of many awards, including the Governor’s Tourism Award. There is still a focus on parent and child fun, and has added on top notch water slides, as well as what is known as the largest wading pool. The special Pirate’s Cove within the park includes its newest attraction “Pirate’s Escape.”

Today, a special reception took place in the park’s center, with the current owners, Chris and Maria Maier, Hermann and Marie Maier’s son and daughter-in-law, showered with special proclamations from the many groups represented, and a congratulatory letter from Governor Chris Christie. 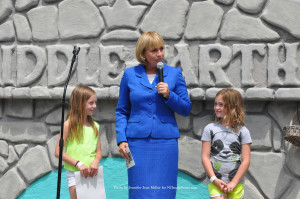 Lieutenant Governor Kim Guadagno delivered the letter on Christie’s behalf. Today, she was Acting Governor while Christie is traveling out of the state. Under her normal duties, Guadagno is also New Jersey’s Secretary of State, a position that oversees the state’s tourism sector. 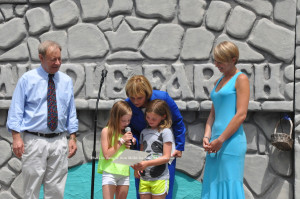 Master of ceremonies for the event was Douglas Steinhardt. Congressman Scott Garrett (NJ-5) and Congressman Leonard Lance (NJ-7) were part of the festivities. 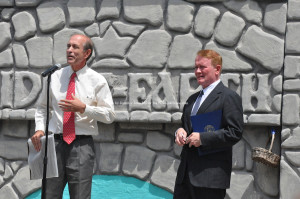 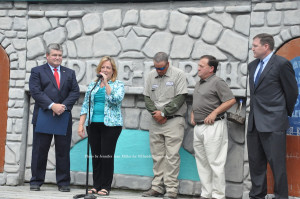 “Today is about memories,” said Guadagno. “For that, we want to thank the Maier family.”

She praised the park for its effort in supporting 250 jobs. She said on the way into the park, she spoke to a 16-year-old employee named Tabitha, who was working there in her first job.

“It [working in the park] creates a sense of loyalty, work ethic, and how to manage money,” said Guadagno.

Guadagno has been making her rounds in the state for her earmarked “Tourism Tuesday” days, to highlight the state’s tourism assets. Last week she was in Sussex County to focus on Swartswood State Park (click here for our story). The trip to Land of Make Believe was a special stop outside of her tour.

She said this year tourism in New Jersey has increased 5.9 percent. Guadagno relayed that due to Superstorm Sandy’s devastation to the shore areas, other places outside of the beach locations, such as the Land of Make Believe, helped to sustain the state’s tourism assets, and increase tourism.

In the letter that Guadagno read from Christie, accompanied by “two of the most important people of all,” as she phrased it, two of the youngest attending the ceremony, Christie lauded the park for having served as a destination attraction, and for its sense of community and wholesome fun.

Two nine-year-old girls, Molly McHose of Franklin and Cameron Ecke of Byram, were the two who spent time with Guadagno throughout most of the ceremony and helped to read Christie’s letter. Prior to the ceremony, Guadagno also posed with the Warren County Fair Princess Gabrielle Martinez, age 10. 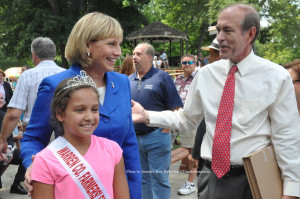 “I commend the Land of Make Believe founders and employees for providing fun-filled entertainment for 60 years,” Guadagno, McHose and Ecke read from the letter.

“Thank you for all you’ve done for Hope Township and New Jersey,” McDonough said. “This institution is a cornerstone of Hope New Jersey, and we’re proud to have it.” 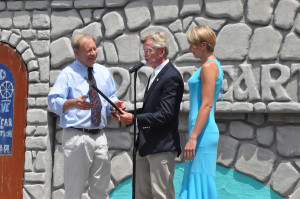 “What a great county,” Garrett added, “to have a favorite candy to eat [Mars] and a fun place to go [Land of Make Believe].”

Garrett said he had brought his children to the Land of Make Believe in their youth.

“Sixty years is a long time in the history of a community,” said Lance. “I’m sure it’s gone by in an instant. Marie and Hermann I’m sure are looking at their son and daughter-in-law with pride.”

Lance turned to Chris Maier and said, “Chris, I hope you invite me back to the 70th anniversary ten years from now, and I promise you I’ll be there.”

Alison Littell McHose said, “We brag about Land of Make Believe all the time.” 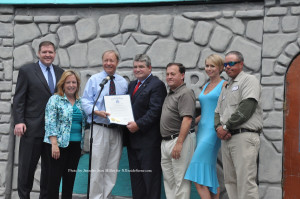 Senate and Assembly members pose with Chris and Maria Maier after presenting their business with the proclamation. Photo by Jennifer Jean Miller.

She noted how between her time in service as assemblywoman, and her father’s as senator, their time in service has likely equated to the amount of time that the Land of Make Believe has been open.

Space, who owns his own family-run business, Space Farms, offered words of encouragement from one business that is a tourist destination to another.

“I know they’re [Land of Make Believe] going to be here for many years to come, and congratulations,” Space said.

DiMaio, who brought regards from Peterson while he was out of town described Land of Make Believe as important, if not more, than other attractions in Warren County, including Mars.

Doherty and Oroho both praised the landmark for its wholesome fun, and as a place for families. Oroho presented the Maiers with a proclamation.

Sarnoski described Land of Make Believe as an “institution.”

“It’s so special to be here today,” he said.

“This is Americana,” added Gardner, indicating that the Land of Make Believe is a generational place. “It’s the greatest thing, keep it going.” 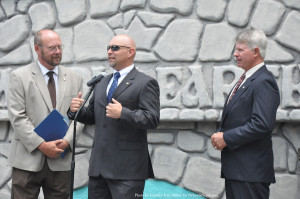 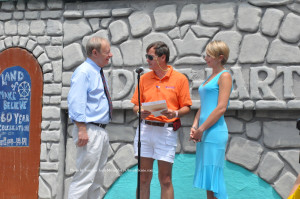 “Thank you for coming and for your support on our special day,” said Maria Maier. 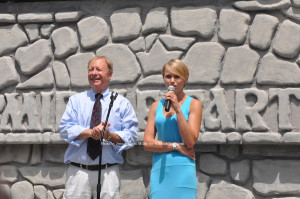 Chris and Maria Maier, owners of Land of Make Believe, thank the crowd for their support. Photo by Jennifer Jean Miller.

“I want to thank each and every one of you,” said Chris Maier. “I’m very humbled this is a great tribute.”

As part of the celebration year the Land of Make Believe is giving away a Ford Escape family-style vehicle and invited entries into the contest.

Chris Maier also recommended that attendees to the ceremony visit Pirate’s Escape, though he did not want to give away the secrets of the ride.

“You’ve got to try it,” Maier concluded.