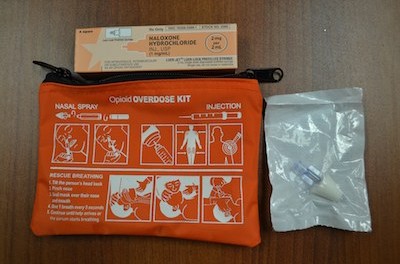 SPARTA, NJ – A 23-year-old woman is alive today (Feb 13) after a Sparta Police Officer administered Naloxone after she fell unconscious while overdosing on heroin. At 1:52 this morning police were dispatched to the apartment building at #200 Woodport Road after a 9-1-1 call reporting that the woman was overdosing.

Cpl. Adam Carbery and Officer C.J. Grauerholz reported that they found the woman’s lips were blue. She was unresponsive, unconscious and she was not breathing. The victim had a faint heartbeat. The caller, who is the victim’s boyfriend, reported that she had been snorting heroin before she lost consciousness.

After officers administered Naloxone along with performing rescue breathing, the woman began to regain consciousness. Paramedics from St. Claire’s in Sussex arrived on scene and administered another 2ml of Naloxone to the victim. She was then transported to the Newton Medical Center by the Sparta First Aid Squad.

Naloxone marketed under the trade name Narcan is a medication used to counter the effects of opiod’s more specifically in overdoses. This is the second save since Sparta Police Officers were trained and began carrying Opioid Overdose Kits in August 2014. Det. Sgt. Terrence Mulligan is the Narcan Program Administrator in Sparta.