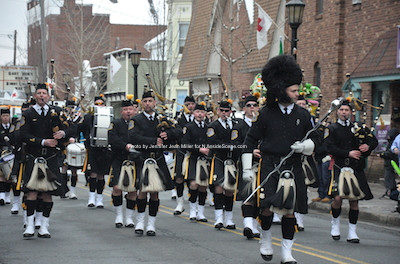 Police Pipes and Drums of Morris County during the festivities. Photo by Jennifer Jean Miller.

“I am honored and humbled to be selected as this year’s St. Patrick’s Day Grand Marshal of Sussex County, and I hope that I can live up to and honor the name of our great Patron Saint, Saint Patrick,” Dunnigan stated upon his selection.

GRAND MARSHAL’S DINNER – FRIDAY, FEBRUARY 19th
The 13th Annual Grand Marshal’s Dinner honoring this year’s Grand Marshal Tim Dunnigan will be held onFriday, February 19th, at Crystal Springs, 3 Wild Turkey Way, Hardyston, NJ 07419. The grand event begins with a cocktail hour at 8 p.m. followed by dinner, entertainment, recognition of our Grand Marshal and lots of great craic! The traditional presentation of the Grand Marshal’s Sash will follow. It has become a practice that the Grand Marshal designates a charity to receive the net proceeds of the St. Patrick’s Day charitable events. Accordingly, this year’s Grand Marshal chose the St. Jude Children’s Research Hospital as the 2016 beneficiary; the Tricky Tray at the dinner and our raffle will benefit this worthy cause of helping sick children.

Please make your reservation now as seating is limited! Tickets are $85 per person up to February 12th; $95 afterwards. No tickets will be available at the door.

This event is a big attraction; so make your reservations at least two weeks early; $15 per person in advance, $20 at the door.

The 13th Annual St. Patrick’s Day Parade in Newton will take place on Saturday, March 19th. Leading the parade will be Grand Marshal, Tim Dunnigan and his family and guests.

The parade steps off at 11:30 from Spring Street near Stuart Street; proceeding up Spring Street then turning right onto Moran Street to Memory Park where it will disband. Spring Street will be closed at 11:00 a.m. from Union Place to Moran Street. Parade units will stage starting at 9:00 a.m. in the lot located between the old Moose Lodge and Camp Iliff on Spring Street. Fire Department and Ambulance Squad units are instructed to stage on Halstead Street near the middle school; but not on school property.

The children’s favorites – Irish theme characters and animals, sweets and other free treats, will be featured in the parade. Please be alert that children do not dash out into parade traffic!

We are most pleased to announce that Mark Hontz will again be our Parade M.C. Mark is a favorite of the spectators and parade participants alike. He has a charming way of warming up the crowd with his comedic wit, Celtic songs and self-accompaniment on his bagpipes; not to mention Mark’s charming commentary as the parade units pass by the reviewing stand on Spring Street.
For more information on the parade and attendant activities, please visit our website at:http://sussexcountynjirish.com/ or Facebook at: https://www.facebook.com/SussexCoStPatricksDayParade/ or call Dennis or Mary Harrington at (973) 827-9179.