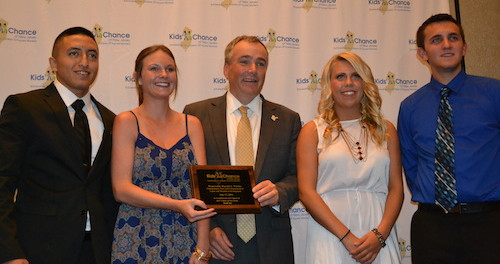 New Jersey Labor Commissioner Harold J. Wirths (center) holds a plaque commemorating his support for Kid's Chance New Jersey, which issued six scholarships, each for $10,000, to students who had a parent killed or catastrophically injured at work. Scholarship recipients included (from left to right) Pedro Morejon of Lyndhurst, Alexandra Kurnath and Mackenzie Kurnath of Seaside Park (formerly of Chester) and Scott Kwiatek of South Amboy. The two other scholarship recipients were Marie Molinaro of Rockaway and Trent Schamble of Vernon.. Photo courtesy of the New Jersey Department of Labor.

NEW BRUNSWICK, NJ – Commissioner Harold J. Wirths of the Department of Labor and Workforce Development commended the charitable scholarship efforts of Kids’ Chance New Jersey today at the organization’s second annual gala at the Heldrich Hotel, where scholarships were announced for six students whose parents suffered fatal or physically catastrophic injuries while working.

“Let me offer my personal condolences to those who lost someone or whose family member was seriously injured while on the job. Such tragedies are often accompanied by financial uncertainty for the workers’ families, and one of the best ways we can help is to assist their children in obtaining or continuing a college or vocational education.  The Kids’ Chance mission is important and truly appreciated,” Commissioner Wirths said.

Kids’ Chance New Jersey, part of a national Kids’ Chance organization founded in 1988, presented $10,000 scholarships to each of six students whose parents were either killed or seriously injured in New Jersey workplace accidents. Five of the students, some with their injured parents, joined the gala, which was attended by approximately 350 people.

To be eligible for a scholarship grant, applicants must have a parent who has been fatally or catastrophically injured in a work related accident, meeting the criteria of the New Jersey Workers’ Compensation Act and resulting in financial need. Applications are available on the Kids’ Chance New Jersey website at: http://www.kidschancenj.org/scholarships/

Anyone who believes they are eligible for assistance or wants to recommend someone for a scholarship, contact the organization via email: info@KidsChanceNJ.org.

New Jersey continues to maintain some of the nation’s safest workplaces. The Garden State has consistently had a lower injury and illness rate than the nation as a whole, and the most recent statistics from 2012 show New Jersey’s safety record remains better than the national average. New Jersey’s private sector sustained job-related injuries and illnesses at a rate of 3.1 cases per 100 full-time workers in 2012, compared to the national rate of 3.4 cases per 100 full-time workers.

According to the federal Bureau of Labor Statistics, 4,628 workers were killed on the job in the United States in 2012, the latest year for which data is available, which amounts to an average of 12 deaths every day in the American workplace. Last year, New Jersey reported 37 fatal workplace injuries.