NEWTON – “This is a very nice turnout for today,” remarked Lieutenant Governor Kim Guadagno today as she looked around the room at the Sussex County Republican Headquarters in Newton.

This was Guadagno’s second trip to the county headquarters, over the last couple of months.

Guadagno said she has 88 more stops to make out of her 90 over the next six days, along the tour throughout New Jersey’s 21 Counties, as she meets supporters, asking for a final push in the final days of the Christie/Guadagno campaign.

Governor Chris Christie is on his own similar and separate tour across the state. 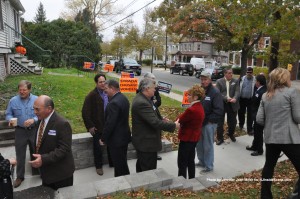 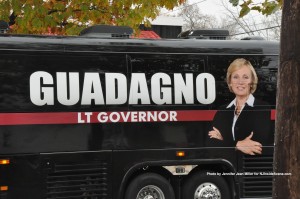 Guadagno is riding to her stops in a sleek coach-style bus, emblazoned with her photo on the side. Her bus rounded the corner this afternoon at approximately 1:40 p.m., turning from Union Place onto Trinity Street, across from the Republican Headquarters. Guadagno made her way across the street, meeting well wishers on her arrival, and then proceeded inside. 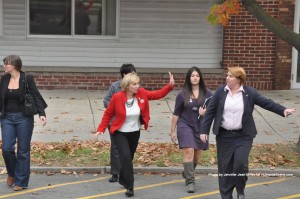 “We’re going to work until the very last minute,” Guadagno said of the campaign. “I know it because I’m going to be on that bus,” she laughed.

She described the progress over the last four years. 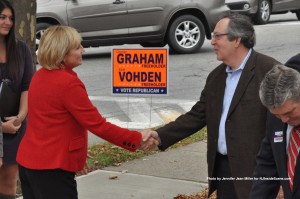 Lieutenant Governor Kim Guadagno shakes the hands of those awaiting her arrival.

Guadagno described the current government as “transparent” and “responsive.” 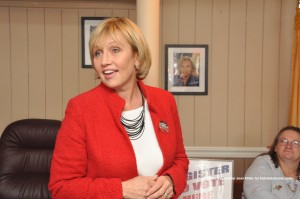 In terms of community, Guadagno spoke specifically about the impact of Superstorm Sandy on Monmouth County, where she is from. Guadagno said during the last election, there was a plurality from Monmouth and Ocean Counties in particular — and though there will still be, it will be harder this round.

She asked Sussex County residents she visited with today for further help.

“I’m up here today because we’re going to need you more now, than we needed you four years ago,” Guadagno said, clarifying that the team needed Sussex County four years ago, however, last year the storm impacted residents in counties such as Monmouth and Ocean, from which they are still rebuilding in those areas.

“Monmouth and Ocean Counties are still wounded,” she said. “We worked very hard to put houses back where there were no houses.”

She said there were 346,000 people left without homes, from the ravages of the storm. Guadagno said 20,000 still remain.

“We’re wounded which means Sussex County needs to step up to the plate,” Guadagno said, asking that Sussex County residents encourage everyone they know, no matter their political affiliation, to get out to vote.

She asked so, especially because of the challenges residents in those hardest hit areas are still facing, and without the opportunities they had four years ago.

“What I’d like to be able to do is to go back to my county and say, ‘you got our backs,’” Guadagno said.

The crowd affirmed their commitment, with their applauds to the Lieutenant Governor’s request. 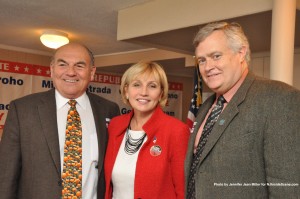 She also asked that the audience vote “no” to the ballot question about the minimum wage increase, which Guadagno said is slated to be automatically tied to the CPI (Consumer Price Index), and will further equate to higher expenses for New Jerseyans, and job losses. She also said she cannot understand why it should be placed on New Jersey’s Constitution.

“We can’t afford it,” said Guadagno.