Eliot Sloan of Blessid Union of Souls sings to Mary and Hap Rowan at the benefit concert for the One Inning at a Time Foundation.

NEWTON – The Newton Theatre was filled on Saturday, Nov. 9, with family, friends and other supporters of the organization One Inning at a Time, a foundation started with the goal to “strike out” rare types of cancer.

Hap and Mary Rowan started One Inning at a Time in 2012, to promote advocacy and awareness about NET (Neuroendrocrine Tumor) Cancer, and other rare cancers. Hap was diagnosed with NET Cancer in 2008, and has undergone various treatments since then, including a special trial that he has participated in since last year.

According to the press release for the NET Cancer Awareness Day proclamation for Minnesota, there are 125,000 NET Cancer patients in the United States and 11,000 cases diagnosed each year.

NET Cancer often disguises itself, by mimicking other illnesses, making it is hard to detect. At the point of detection, in some cases, the cancer has metastasized to the organs at dangerous levels. Apple visionary, Steve Jobs, died of NET Cancer in 2011, after battling the cancer which began in his pancreas.

Medical students are taught now that when they “hear the sound of hoof beats, think horses not zebras,” because the quicker the diagnosis is made for NET Cancer, the better the patient prognosis is. For Hap as a baseball player and athlete, he has persevered over many of the trials of the illness easier than others, because of his excellent previous physical condition. It, however, took eight years to reach a diagnosis.

Saturday’s concert commenced, in keeping with the baseball theme, with the National Anthem sung by Sean Oroho, as well as a benediction.

Ciro Patti, Jr. was the opening act, and remarked, “I’m doing a lot of Hap’s favorite songs, because he asked me to.” 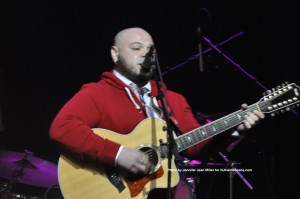 Ciro Patti, Jr., during the benefit concert for One Inning at a Time.

Some of the songs were: “Imagine,” “Home” (Phillip Phillips), “Your Song,” and “Hallelujah.” “Hallelujah” garnered Ciro a standing ovation.

Ciro told the audience that he met Hap when he was working at the Dairy Queen in Branchville six years ago, and told him his guitar was in the back.

“And here I am six years later playing for you guys,” he said.

During the ten-minute intermission in between Ciro’s and Blessid Union of Souls’ performances, Hap and Mary reported that last year, the organization helped seven families with cancer, including three children.

When Blessid Union of Souls took the stage, lead singer Eliot Sloan said that this concert was one of the special dates on the band’s calendar, and acknowledged the importance of the relationship he has with Hap, which has blossomed into what he hopes will be a lifetime friendship. 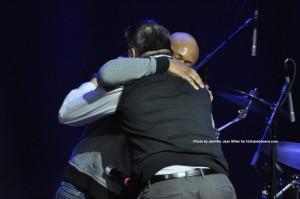 Eliot Sloan of Blessid Union of Souls embraces Hap Rowan, after singing the song, “I Believe,” onstage to Hap and his wife, Mary.

We’re in front here,” said Eliot, “but Hap and Mary are the stars.”

Among some of the songs they played were: “Oh Virginia,” “Back from the Dead,” “Light In Your Eyes,” “I Believe,” (which Eliot invited Hap and Mary onstage to serenade them), and “Hey Leonardo (She Likes Me for Me).”

At the end of the show, the band was given a standing ovation, which was followed by an energetic “Encore!” request from the audience. The band sang the U2 song, “Pride (In the Name of Love).” 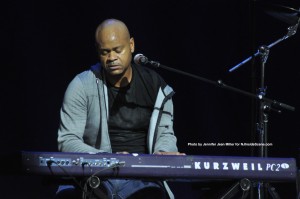 Eliot Sloan of Blessid Union of Souls, at his keyboard.

To learn more about the One Inning at a Time Foundation, click here.

Click here for our previous story on Hap Rowan and One Inning at a Time.

Watch the video attached to this story to view highlights from the concert on Nov. 9.