NEWTON – On Halloween eve, I have, the past few years, been out snapping photos out and about of cute kids in costumes, and other Halloween scenes, for the publications that I worked with previously.

This year, my Halloween took a different route, as I took the time to enjoy the view and festivities from an “inside scene,” with my own and new publication, NJ Inside Scene.

It all started with my daughter asking me to dress up with her this Halloween.  So, as I worked away from home on various things, I prepared my costume, to attend her school festivities. Little did I know what dressing up would bring.

Those who know me know that Marilyn Monroe is very dear to my heart, for many reasons. I have been an admirer of Marilyn’s since I am a young girl, and learned late last year, after all of this (being a collector of various things, including owning a small collection of items that belonged to her, plus working on articles, collaborating on some exhibit books about her, and now writing my own two biographies on her), that she is also my distant relative (I am a big genealogy buff).  To me, that makes it all more exciting and cool, to be blessed with that affiliation to a legend, and brings things with my interest in her even more full circle.

So, I decided to dress as Marilyn this year. I have dressed as Marilyn in the past, including a charity event, and for some photos, so I always have some pretty Marilyn-esque dresses on hand, and all the other accompaniments – wigs, jewelry, blue contacts, and a mink stole.

I made my transformation and headed to my daughter’s school. It is always so great to see the kids in costume as they parade by and wave, during their own annual festivities. They enjoyed parties as well after in their classroom, which I visited for a bit as well.

What was really fantastic to learn is how many young children in the school knew who I was. First, that means, I obviously was recognizable as who I was portraying, so I took that as a compliment. Secondly, and more importantly, that means that her legend still prevails, which was heartwarming to learn. She left us with her angel wings over 50 years ago…before I was also born. To know that children who could be her grandchildren or great-grandchildren in age, if she was still here and if she had children (which sadly, she struggled with, as she always wanted to be a mother, and struggled with miscarriages, and ectopic pregnancies), know who she is, was very cool to me, that she is still so beloved.

Then Halloween evening, I made my way to Downtown Newton for the annual parade, which is sponsored by the Newton Fire Department and Newton Moose Lodge #432.

As families parade through town in costume, from the parking lot across from The Newton Theatre then up Union Place, onto Spring Street, then onto Moran, next Trinity, and ending in the parking lot across from the municipal building, the fire department followed behind with its engines. The Newton Police Department and the DPW also assist. It is a very cool collaboration indeed between the group, town, and residents, which everyone enjoys.

The festivities were fun and noisy along Spring Street, as they should be on Halloween…though noisy in a good way – no trouble…as everyone enjoyed themselves. There were spectators on the sides of the street (one who bowed to me as I walked by in my Marilyn costume, which was cute), and also some wonderful residents who handed out candies to the children. 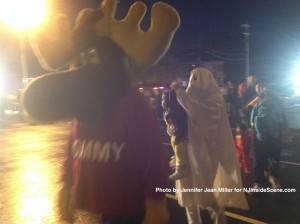 Participants following Tommy the Moose, through the costume contest.

Next, was the costume contest portion, where all ages were invited to participate. Each of the children, were given a goody as they marched by the judges, and were led in parade fashion in the parking area, by Tommy the Moose from the Newton Moose Lodge. There were babies dressed as dragons and pumpkins; kids ranging from witches to football players to pirates to princesses to superheroes; and adults from mix tapes to Charlie Chaplin to the Bride of Frankenstein (which was an awesome costume!).

I was honestly on the fence, about participating in the contest, and turned to my little girl, who I asked if she thought her mom should participate.

“Yes mommy, you should!” she exclaimed, and she ended up taking some photos and video of me.

So I ran onto the end of the parade for my age group (15-adult) and made a showing as Marilyn, blowing kisses and waving to the judges and spectators, as I tagged towards the end of the rest of the group.

And soon, “Marilyn” earned the #2 spot in the costume contest, which was fun, a surprise, and exciting to have been chosen!

I’ve posted the results below of the full contest, but if you heard of someone dressed as Marilyn driving through town, and even stopping for pizzas at Villa Capri (they had the two pizzas for $16.99 treat special), that was Inside Scene aka Jennifer Jean here. For me, it was touching to see the smiles on the faces of people as I walked by and say, “Hey, you’re Marilyn Monroe!” 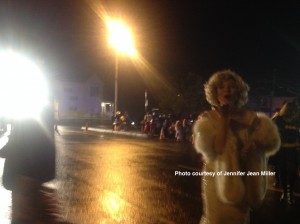 Dressed up as Marilyn Monroe and walking through the costume contest portion of the parade, blowing a kiss to my little photographer.

We know that there were many fun activities going on in Sussex County and this was just one of them. Hope you enjoyed your festivities wherever you were. I think we’re very blessed to live in this county with great things to do, and great people to do those things with.

Hope you enjoy the video footage from some of the highlights on Halloween Night in Newton.