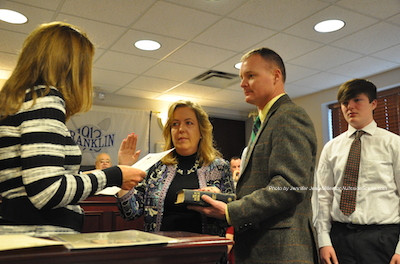 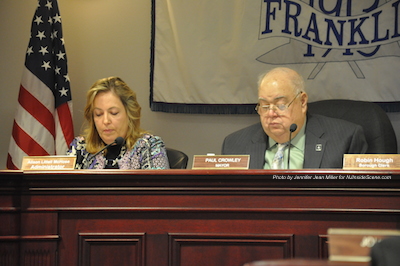 McHose thanked her family and the council and expressed how she looked forward to working with the residents of Franklin.

“I also pledge to work hard for residents of the borough,” McHose said. 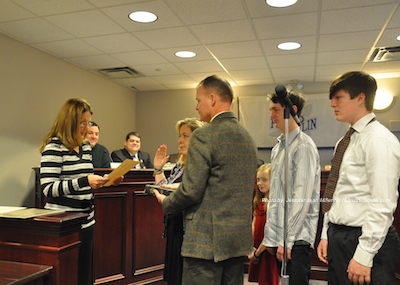 Alison Littell McHose surrounded by her family during the swearing in. Photo by Jennifer Jean Miller. 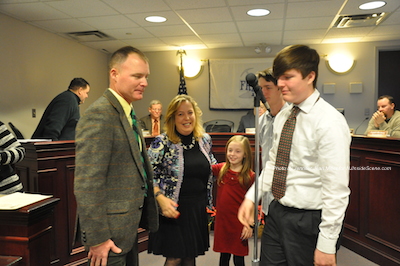 “I care very deeply for this town and I am proud to be a resident,” McHose said. “We have much work to do, but I believe we can move forward in a positive direction to achieve a healthy work and living environment.”

Click below to view video footage of McHose’s statement.

McHose, who is a member of the New Jersey General Assembly as an Assemblywoman (R-24) said at some point in the future she will resign from the assembly to devote her time exclusively to her new position as borough administrator.

Crowley said it was decided effective immediately to not renew the contract of borough administrator Jim Kilduff, an action that the council unanimously passed.

All members of the council, except for Gilbert Snyder who abstained with the vote, additionally agreed with Crowley’s appointment of McHose, as did members of the audience, who applauded subsequently following his announcement.

“It gives me great pleasure to vote, ‘yes,’” said councilman Robert Dabinett, who had just been sworn in.

Councilman Joseph Martinez was sworn in on August 6, following the departure of councilman David Fanale. Councilman Joe Limon was also sworn in. 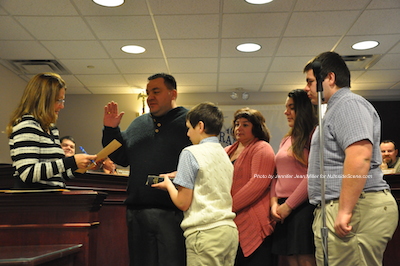 Councilman Joe Limon at the swearing in. Photo by Jennifer Jean Miller.

McHose will commence a three-year contract with the borough, subject to attorney review, with a salary of $98,000, with a two percent increase the following year.

On the consent agenda, members of the council disagreed on the adoption of the resolution for professional services, for roles such as borough attorney, borough engineer and borough auditor, with Limon and councilman Fred Babcock voting to move forward with the motion and newly appointed council president Nick Giordano, Martinez, Snyder and Dabinet voting, “no.” The measure will be discussed at the next council meeting.

The mayor recognized Troy Kays as the new chief of the Franklin Fire Department and after borough clerk Robin Hough swore in Kays, he introduced his officers, with Hough also swearing them in. 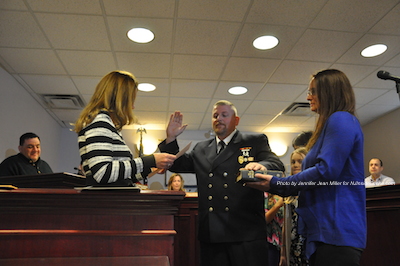 Limon described the news of McHose as the new borough administrator as a “win-win.”

“We had a rough year last year in the papers for all the reasons and now we’ll be in the paper for all the right reasons,” Giordano added, describing it as one of his proudest life moments.

Babcock reflected on the upcoming projects in the borough for the year and congratulated McHose.

Martinez said he thought it would be a great year with a lot of positive things happening for the borough.

Dabinet said he agreed with all said and he “looked forward to working with the council and people of Franklin.”