The signage along Route 206, reflecting the closure of Nature's Cove. Photo by Jennifer Jean Miller.

HAMPTON TOWNSHIP, NJ – When Nature’s Cove Pet Center, a pet store in Sussex County that has been voted by The New Jersey Herald’s readers the county’s number one for over six years, including the last two, announced on September 1 it would be closing its doors after 17 years in the area, loyal followers have shown an outpouring of support to the local merchant.

“I never thought that I would have to say this but after 17 years, we will be closing our door,” wrote TJ Cheevers, the store’s owner, on the store’s Facebook Page. “We need to liquidate all our inventory and displays by September 30. So the deep discounts start now. We have a ton of stuff to move. So come down and see what we have. I want to personally thank all of you for your years of loyalty and friendship. We have had a hell of a lot of fun over the years.”

The store’s Facebook Page was flooded with about 200 comments on the thread in support after Cheevers posted this message, as well as 83 shares, many noting how sad they are to see them go.

“Another example of the big box stores closing the mom and pops!” one Facebook poster wrote.

“This is so sad!” another person wrote, “I’ll miss this place. I’m in there every week.”

Cheevers told NJInsideScene.com it was the loyal customer base that has kept him in business over the past two years, since nearby PetSmart, one store with the giant pet store chain, moved into the same complex. Though Cheevers noted that particular giant retailer has also been struggling in the current economy, with a small business like his, about 30 to 40 percent comes off the top for expenses. With a business like PetSmart though, he said, when it is not doing well, the stores still have millions in corporate backing it.

While some may think a store like PetSmart may offer a better buy, Cheevers noted, “I beat their price in everything they have.”

At the end of the day, however, Cheevers said when a business is in the red, it must make a financial decision, which he decided to do.

He said it emotionally, has been a very difficult week. 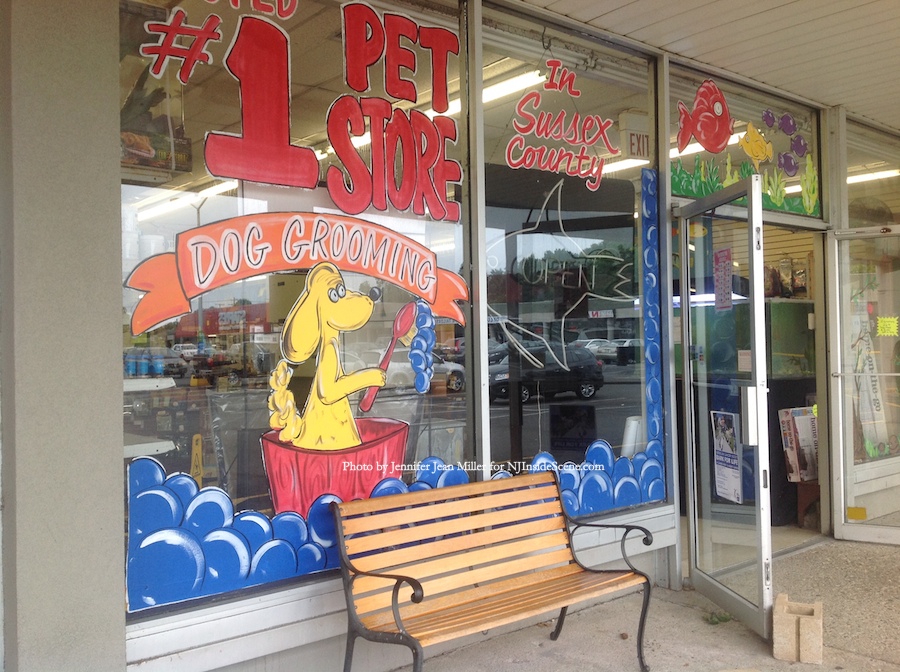 The front window of Nature’s Cove, which boasts of its place as the number one rated pet store in Sussex County. Photo by Jennifer Jean Miller.

“I want to thank everyone for their love and support yesterday,” he followed up on September 2 on Facebook. “Yesterday was really hard for all of us, but seeing how much everyone cares was incredible.”

“People have been coming in here and crying,” Cheevers told NJ Inside Scene. “Emotionally, it’s so hard.”

He said, the hardest part about his decision is the impact it has on his regular clients, and staff. He said some clients stop in weekly, to pick up crickets, for example. One longtime client has been patronizing the store since his son was a little boy, and the little boy has now grown into a teenager who just received his driver’s license. Staff members have also been with Cheevers for seven years and more.

On Facebook, some fans posted that they frequent the store from as far away as Bergen County, and across the border in Pennsylvania. Many have liked the personalized attention from Cheevers, and he and his staff’s knowledge base about pets, their food, and more.

Walking in now to his store, Cheevers said, which was once packed full with items, and the shelves are becoming bare, he describes, “It’s not my store,” as he entered this morning.

When asked what Cheevers future plans are, he said he would be taking a break after his store closes, and will then regroup. When NJ Inside Scene also inquired if Cheevers might reopen in another location, he said he may in the future, and had considered it. His concern has been the potential of restarting a business, and having to close as he has had to do now.

Cheevers, in the meantime, has been overwhelmed with the support from his customers.

“I’ve seen more this week than I thought,” he said. “The response was crushing, but in a good way. It shows we must have done something right.”