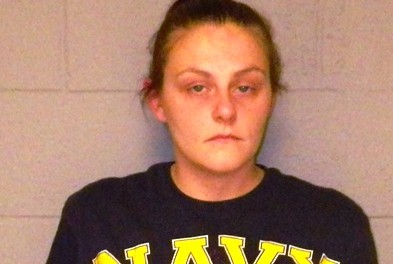 WHERE IT HAPPENED: Lackawanna Trail Hopatcong

DATE OF ARREST: First charged on 06/09/14 for CDS. Now we have a warrant for her arrest

VICTIM: Not disclosed by police

ANY OTHER INFORMATION: A woman came into headquarters to report theft from her husband.  He was not present because he is a hospice patient.  The woman stated that she thinks its her sons girlfriend who is Jennifer Nicholson. She was living in the home with them.  Officer Luciani found Nicholson later in the shift.  In her room was a marijuana cigarette.  She was arrested on that and 3 warrants.  They were as follows: Bedminister $1000.00, and two from Roxbury for $500.00 each.  Nicholson was arrested and brought to the police station.  She was questioned about the theft of the credit card but denied using it.  Officer Luciani told her he will be getting video and it would show her using the stolen credit card. She still would not cooperate.  Nicholson’s boyfriend bailed her out on the three outstanding warrants. She was charged for possession of marijuana and released.

Officer Luciani then went after the surveillance tapes as follows: Liquor Factory in Hopatcong, Walmart in Flanders, Quick Chek in Hopatcong, Shoprite in Succasunna, MCDonalds in Byram and Rite Aid in Hopatcong.  He found Nicholson using the stolen credit card.  Officer Luciani could not locate Nicholson who no longer lives with the victim.  There is now a warrant for $15,000.00 for her arrest from these charges.  There is also two $500.00 warrants out of Hopatcong for Nicholson for failure to appear for the possession of marijuana charge that she did not show up in court for and a driving while suspended charge.