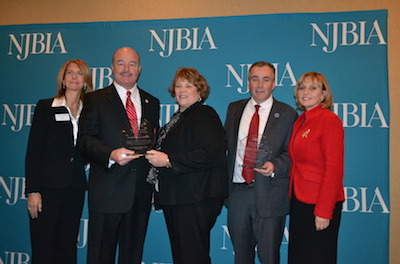 EDISON, N.J. – Commissioner Harold J. Wirths of the New Jersey Department of Labor and Workforce Development was presented today with the 2014 Paul L. Troast Award for Public Service by the New Jersey Business and Industry Association for initiating an anti-fraud program that helped to bring the insolvent New Jersey Unemployment Insurance Trust Fund back into full solvency two years ahead of schedule, sparing Garden State employers millions in tax hikes.

The award was presented today at the NJBIA’s 2014 Public Policy Forum, which was held at the Sheraton Edison Hotel Raritan Center. Commissioner Wirths shared the honor with State Sen. Fred Madden, both of whom the NJBIA credited with leading a bipartisan campaign supported by the Christie Administration and legislators from both parties to restore the fund and protect New Jersey businesses from devastating tax increases over the past several years and in years to come.

“I am humbled by and thankful for this honor. We really just set out to do what we believed to be the right thing _ making certain no one takes money from the Trust Fund who did not deserve it. We saved more than $530 million to date, and some of our anti-fraud steps were simple and common sense measures. In the end, we have achieved what we set out to accomplish, and we will keep developing new protections to keep the fraudsters at bay,” said Commissioner Wirths.

New Jersey’s Unemployment Insurance Trust Fund plunged into deficit in March 2009 after $4.6 billion in diversions over two decades, multiple tax table adjustments and a severe recession that forced the state to borrow federal funds to make benefit payments to large numbers of unemployed workers. The deficit, which grew to a peak of $2.1 billion by April 2011, triggered both state and federal laws designed to replenish the fund by severely increasing taxes on employers.

As the Governor and legislator passed laws to lessen the annual tax hikes, Commissioner Wirths launched the first of several anti-fraud measures in March 2011 that, to date, have prevented more than $530 million from being improperly diverted from the Trust Fund. The measures helped to move the fund into a positive balance for the first time last year, eliminating a threatened $213 million federal tax hike that New Jersey employers were facing last January under the Federal Unemployment Insurance Tax Act (FUTA).

Last May, the Trust Fund moved into full solvency with a positive balance of more than $510 million, triggering annual, incremental tax rate reductions for employers projected to amount to at least $1 billion over five years.

“Through your outstanding leadership over the years, our Unemployment Insurance Fund’s fiscal health and integrity has been restored and New Jersey’s business community is no longer overburdened with high U.I. taxes,” said Melanie Willoughby, Senior Vice President at the NJBIA, in a letter notifying Commissioner Wirths of the award.

The Trust Fund is financed largely by employer taxes, and the $1 billion reduction that will unfold in coming years is linked to a tax scale created under state law that raises or lowers the rate employers must pay depending on the health of the Trust Fund. The new tax break is in addition to nearly $1 billion in state tax hikes already averted by New Jersey businesses since Governor Christie took office in 2010 and signed bipartisan legislation to scale back the extent of Trust Fund tax increases triggered under New Jersey laws.

Bipartisan legislation, endorsed by Governor Christie, also placed a measure on the November 2010 ballot that was resoundingly adopted by New Jersey voters to stop diversions from the Trust Fund. Between 1993 and 2006, about $4.6 billion in taxes that were supposed to be paid into the Trust Fund had been diverted toward other state projects and expenses, leaving the coffers low when the recession hit.

The Department of Labor’s first and most successful anti-fraud measure involved the simple process of cross-checking Unemployment Insurance lists against the National Directory of New Hires to determine if people collecting benefits had already returned to work. That practice has saved almost $390 million to date.

Other major anti-fraud measures imposed included software installed to detect claims being illegally filed from foreign Internet Protocol or IP addresses and the Identity Verification checking that requires people filing Unemployment Insurance claims to answer questions to verify their identity. Since June 2013, the Department of Labor also has collected nearly $50 million through the Federal Treasury Offset Program or “TOPS,” which allows the department to offset unemployment insurance payments that were illegally collected by individuals by seizing their refunds and the deductions the individuals were due on their annual federal income tax.