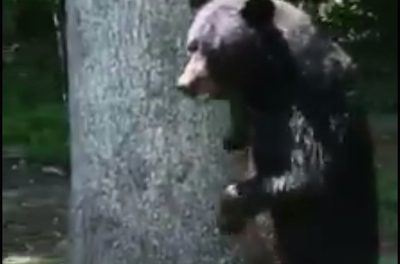 "Pedals" the bi-pedal bear, who concerned fans still hope can go to a rehabilitation center that has offered to take him in New York State. Photo courtesy of Facebook.

Those who have seen Pedals literally walking around in his native New Jersey are thrilled with the bear’s return, after he was last spotted in Dec. 2015 in West Milford, and was first seen in Aug. 2015. Most recently, Pedals was seen in Oak Ridge.

State officials have confirmed “Pedals” a bear who walks like a human on his two hind legs, is in good health after hibernating over the prior winter season.

Residents in Oak Ridge toasted to Pedals in one local establishment, and others expressed their relief at seeing him. He often walks through their yards, with residents and Pedals having a mutual respect for one another. Those who have witnessed his upright gait have remarked that he appears like a human being outfitted in a fuzzy bear costume.

Pedals’ walk is due to two injured front paws (one is partially missing and the other with injury) and a concerned citizen in Oak Ridge started a GoFundMe campaign last October for Pedals, to raise monies to have him transferred to the Orphaned Wildlife Center. The group, located in Otisville, NY, offered to take Pedals, and committed to creating a new enclosed area for him, equipped with his own den, with plans to help rehabilitate his injured paws, which biologists believe were caused by a car.

The fundraiser has raised about $23,000, but the State of New Jersey’s Division of Fish and Wildlife refused to permit transfer of the bear to the sanctuary.

While the Orphaned Wildlife Center has offered to create a permanent residence for Pedals, the Division of Fish and Wildlife has expressed that Pedals is better to remain in a familiar habitat. Pedals cannot be released into a center’s care without permission from the State of New Jersey. The state has also ruled based on video footage that Pedals is deemed healthy at the current time.

A Facebook Page has provided updates about Pedals, including photos. The Page, called “Pedals The Injured Bipedal Bear” has indicated that it has “exhausted all avenues” and “fought an uphill battle” in terms of placing Pedals in the care of a sanctuary. The Facebook Page administrators have informed Facebook fans that they have reached out to politicians, celebrities and legal defense associations for assistance. They also had a petition for his transfer with an excess of 300,000 signatures. No one is permitted to trap and bring Pedals to the sanctuary without state approval, or to feed him.

“Bottom line,” administrators wrote, “without the approval of the NJ Division of Fish and Wildlife no one can help Pedals, they hold total jurisdiction. If you want to know why they think he is fine please contact them.”

Click to view a video of Pedals from June 20, courtesy of Facebook/Joey Esposito.

“Frankie” is another black bear that the Orphaned Wildlife Center has rehabilitated after injury, in the video below, taken a few years ago.

Frankie’s story is a highlighted success story on the sanctuary’s website. The bear was delivered to the sanctuary after a car collided with him nearly four years ago on July 24, 2012. He was paralyzed and comatose. His leg had compound fractures.

Originally, it was decided if he did not improve, euthanization was the only option.

But Frankie did slowly but surely progress. After three days in a coma, he awakened. Still unable to move except for his eyes and mouth, caretakers syringe-fed him raw eggs and baby food. He was able to move one of his hind legs on the sixth day, and within a week, his front legs and his head. His appetite improved, and laser therapy was administered.

Below is the day Frankie first moved.

He was hand-fed his meals and received regular massages, responding well to his care, and caretakers noted Frankie never attacked or bit them, and always responded positively to his care, and the love and attention from humans.

Two weeks after his arrival, Frankie endured a five hour surgery, which included rods placed into his injured leg. He was kept in an enclosed area cushioned with quilts and was comfortable. Slowly, he was able to move again, though his movement needed to be limited to allow healing of his hind leg. Frankie enjoyed eating fruits, and especially enjoyed summer treats including watermelon, strawberries and peaches. Soon, he was also drinking water on his own, but also enjoyed jelly donuts, which was a way to disguise his antibiotics and pain medications.

With Frankie’s human contact and his injuries, his permanent home is now in the Orphaned Wildlife Center. At the time he arrived, Frankie was just 80 pounds, and by the time he was there about four months, he was over 200 pounds at age two.

The rods were removed from his leg, beginning with one on Jan. 1, 2013. He soon became friendly with the other bears in the sanctuary, and lives a normal and happy life. Many have been credited for saving him, including the person whose car Frankie collided with, and the police officer that contacted the sanctuary.

Human friends who are looking out for Pedals are hoping and praying for a similar happy rehabilitation story for Pedals. InsideScene.com will provide updates to Pedals’ story when new details become available.