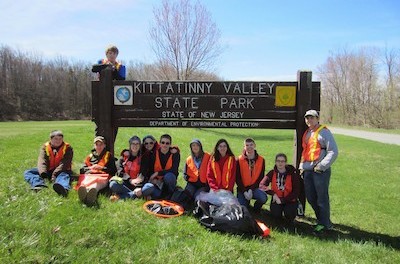 On Saturday, April 25, Venturing Crew 276 of Byram Township participated in the annual Andover Clean Up. Each year Andover sponsors a cleanup for volunteers to pick up trash along the side of the road. A group of teenagers from Crew 276 spent their Saturday morning hiking along Goodale Road near Kittatinny State Park. Crew members picking up trash had their eyes opened to a sight they had not expected. Garbage was strewn up and down the road in mass quantities. Cigarette butts, beer bottles, soda cans, and an assortment of interesting items littered the beautiful countryside. At one point, members of Crew 276 came to a farm where horses were running around a field next to the road. The fence that enclosed their pasture came very close to the end of the road and passers-by had thrown empty soda cans and cigarette butts close to the horses’ home so we cleaned up that debris as well. By the time the Crew made it to the end of the road, they had filled 7 bags of trash. The amount of trash found was atrocious, so we were happy to help out cleaning the community.

Later that evening, Venturing Crew 276 drove to Hamilton, NJ to participate in an overnight rock climbing event at Rockville Climbing Center. The year before the crew had also participated in this event and had found it so much fun that they decided to do it again! Venturing Crew 276, along with their friends from Venturing Crew 34 (Fort Dix) and Boy Scout Troop 76 (Shohola, PA) had the opportunity to start climbing after the center closed for the night. They climbed until one in the morning. Members were taught how to use the auto-belays, which are automatic devices that allow someone to climb without a belayer. Attendees also learned about rock climbing and belaying. Some members had the opportunity to belay for their fellow scouts. It was a fun filled and adventurous night where some attendees stepped out of their comfort zone and tried something new. Personally, I am terrified of heights, but the center makes you feel comfortable enough where you want to look past your fears and try something new.