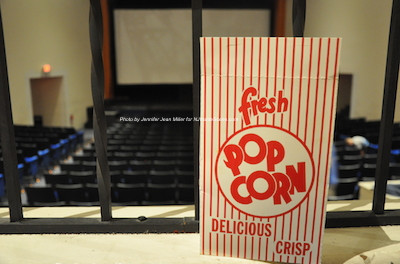 Movies will be shown weekly at The Newton Theatre on the theatre's new 30-foot screen with its HD digital projector and sound system. Photo by Jennifer Jean Miller.

NEWTON, NJ – The Newton Theatre has enjoyed its run since it opened on May 15, 1924 as a performing venue for live stage shows, including vaudeville and other shows back in its heyday.

Today it is a premiere destination as a performing arts center in the Skylands area for concerts, comedy and other shows.

For most of The Newton Theatre’s history, it had been a movie theater in the area. Over the years prior to The Newton Theatre’s tenure as a performing arts center destination, it experienced several transformations as a cinema. While at one time the theatre held 1,000 seats after it opened and was one large performing venue, by the 1970s, the theatre was divided with a center wall into two smaller and separate cinemas under one roof.

After changing several hands, The Newton Theatre was shut down as a movie house in 2010. In 2011, it was returned to its original glory, with the center wall removed, its stage revitalized, its art deco features accentuated with paints reminiscent of the era when it first came to life and on September 9, 2011, the theatre celebrated with artist Todd Rundgren as a sold-out act in the reborn performance destination.

Other artists who have graced the theatre’s stage are: Lyle Lovett, The Bacon Brothers (Kevin and Michael Bacon), Kansas, Jon Anderson, The Glenn Miller Orchestra, Judy Collina, Al DiMeola, and many others.

Nearly four years after its new lease on life, the theatre will add movies back into its repertoire each week, in addition to the now renowned stage shows. Film dates, times and movies will be announced soon, with a variety of film genres to show on the 30-foot screen. The Newton Theatre now boasts an HD digital cinema projector and sound system.

The theatre will kick off the return to movies with The Rocky Horror Picture Show on Saturday, June 27, with a special pre-show party starting at 8 p.m. with dancing, music and a costume contest. The show starts rolling at 9 p.m. with a shadow cast acting out scenes along with the film.

Editor’s Note: The author of this story Jennifer Jean Miller is an advertising consultant with The Newton Theatre.