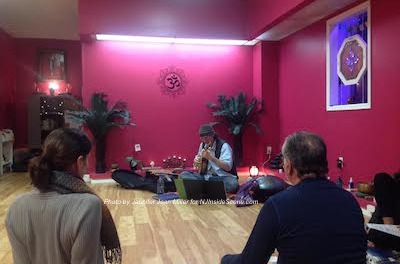 13 Hands aka Dalien during the concert at PEARLL Yoga. Photo by Jennifer Jean Miller.

FRANKLIN, NJ – PEARLL Yoga for the Soul was host to a special holiday concert on Saturday, Dec. 6, with Grammy Award Nominated musician, 13 Hands.

13 Hands is the name for Dalien, who was nominated for two Grammy Awards, is a Yoga Professor at Montclair State University and is known for his instrumental healing music.

His sound is often compared to as a mix of “David Gray, Peter Gabriel, Pink Floyd and everything that was great about the 60s/70s.” his music is additionally filled with Indian, African and Native American components. He mixes an array of instruments into his performances including acoustic guitars, hang drum, harmonium, Djembe and Doumbek.

The intimate two-hour concert at PEARLL Yoga for the Soul took place at the studio and included a sing-along with yoga chants, such as “Radhe Govinda,” “Sita Ram,” and the “Ganesha Chant.” 13 Hands offered other songs, including the traditional Christmas song “Silent Night.”

A portion of the proceeds for the 13 Hands Concert benefitted Domestic Abuse & Sexual Assault Intervention Services (DASI) and the Wounded Warrior Project.

The next event for PEARLL Yoga for the Soul will take place on Saturday, Dec. 20, with Jinglebellies – A Belly Dance Event. The event begins at 5:30 p.m. (doors open at 4:30) and features the area’s favorite belly dancers.

Editor’s Note: PEARLL Yoga for the Soul is an advertiser on NJInsideScene.com. To advertise contact Jennifer Jean Miller at jennifer@jjavenueproductions.com.