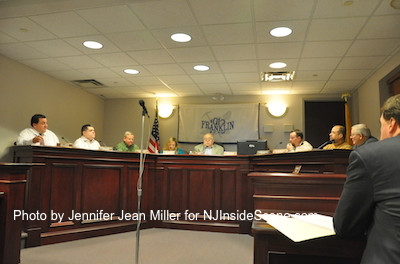 FRANKLIN BOROUGH, NJ – As work on the 2015 budget continues, members of the Franklin Borough Council held discussions about particular purchases while at their Tuesday, Feb. 24 council meeting.

The council recommended the department determine first that the vehicle, which is at Royal Pontiac, is mechanically sound, especially with concerns about the mileage.

The council polled and all agreed that the fire department should proceed with looking further into the purchase and the item would be on an upcoming agenda.

Borough administrator Alison Littell McHose said over the last two weeks she has been working on the budget. Part of the process this year has been in determining what the outcome at the state level would be with the legal decision over the pension repayment. McHose said she had been actively speaking with state officials on the topic.

“We are hopeful it won’t impact us in our budget formation this year,” she said.

As part of the process, the council adopted the temporary 2015 budget, which permits capital expenditures.

Two purchases are on the agenda for public hearing at the Tuesday, March 10 meeting. One is for $8,700 to upgrade the security system at the police station, for $5,900. The other portion is to repair the PA system in the building.

The second item was for office equipment, with $9,000 from reserve and $2,540 from the capital improvement fund. The project is fully funded and for a new server, which has been band-aided over the last several years. As part of the project, also for public hearing on March 10, there will be a wireless system with Google Apps, where documents are always archived.

Mayor Paul Crowley thanked the DPW for the efforts in snow and ice removal during the many storms. He also praised the police department for the first Narcan save, specifically Lieutenant Jeffrey Smith and Officer Jesse Babcock. “I’d like to publicly praise them for their fast action and use of the medication.”

Another discussion point during the meeting was the possibility of a walking path around the Franklin Pond. Councilman Joseph Martinez said that the recreation committee has funds for the project. Councilman Robert Dabinett asked that the council be able to review the plans for the path before it is voted on. Martinez added that the project can also be priced without the boardwalk, which could keep costs more manageable. Final plans and the cost differences are planned for review at the next council meeting. 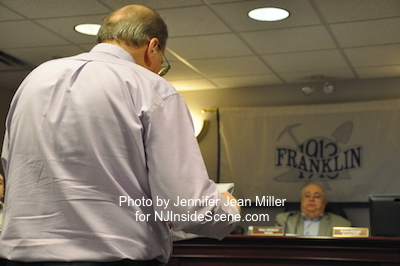 Resident Dick Durina makes a public statement about comments he said the mayor made about him at a meeting on Dec. 9. Photo by Jennifer Jean Miller.

Resident Dick Durina attended the meeting and asked for permission during the public portion to extend his comments beyond the three minute threshold per speaker. Crowley granted permission and Durina countered comments he said the mayor made about him during the Tuesday, Dec. 9, 2014 meeting. Durina said that the mayor referred to him as “mean-spirited,” and that he is sending a message of not wanting to pull people together. Durina read from letters he had received from his time serving on boards in Franklin, as well as clips from The New Jersey Herald from 1995, where members of the council affirmed him. He read from the Our Town newsletter the borough previously produced, and positive commentary he received while working at JCP&L. Durina also cited his role as freeholder. Durina commented that he felt the mayor used his position as a “witch hunt.” “Paul,” Durina concluded, “I am proud of my public service record. You say I come to meetings to divide people and that’s not true.” There was no further comment from the mayor or council regarding Durina’s comments. 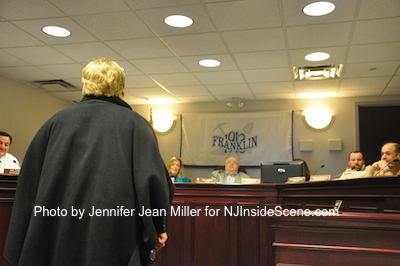 Donna Arrigo was another resident who spoke during the public portion. Arrigo asked the council, “How many of you read your packages before you come to the dais?” Crowley vouched that all packages were picked up in adequate time prior to the meeting. Arrigo explained she was asking on behalf of Franklin residents, to ensure the packages are being reviewed. Before departing the microphone, Arrigo said she wanted to verify that packages the council members received were being reviewed. She added that the fire truck the department is seeking to purchase could have had $27,000 towards it “if the council made the right vote towards it.” Neither the mayor nor other council members replied to Arrigo. She was referring to the vote at the previous council meeting on Tuesday, Feb. 10 taken to choose the borough attorney. The council selected between the firm Laddey, Clark and Ryan and Schenck, Price, Smith & King. The former offered a quote of $3,000 monthly and the latter $5,291.66. Dabinett and councilman Nick Giordano voted for Laddey, Clark and Ryan, while Martinez and councilmen Joe Limon and Fred Babcock voted for Schenck, Price, Smith & King. Councilman Gilbert Snyder was absent from the meeting. During the meeting, Dabinett questioned the mayor’s acceptance of a $500 campaign contribution from the Skylands Victory PAC, a group he questioned if the borough attorney, John Ursin, had ties to. Dabinett said he did not question the legitimacy of the donation, but the ethics if Ursin was involved with the group. During the meeting, both the mayor and Ursin denied Dabinett’s claim. Dabinett in a statement to NJInsideScene.com, as well as residents who had vented on social media about the decision, advocated for Laddey, Clark and Ryan’s Tom Prol. Prol, a native of Franklin, Dabinett described as a “man of impeccable character and reputation.” Prol is the vice-president of New Jersey’s state bar. In reference to those who voted for Ursin, Dabinett told NJInsideScene.com that “they won and the taxpayers lost. Only time will tell.” Council people who decided in favor of Ursin, also took heat from several residents in a Facebook Post. One of them lambasted was Martinez, who replied to NJInsideScene.com about his vote that, “I voted for what I think was right for the town.” Martinez told NJ Inside Scene his experience working with Ursin has been positive and said, “He’s very forthcoming with his information.” Martinez said he carefully reviewed all of the information presented to him, plus took into account his own experiences in working with Ursin as a councilman, and decided that Ursin is already versed with working with Franklin and familiar with the town’s issues. “I haven’t had an issue with John,” he said. “This is the best possible direction.”