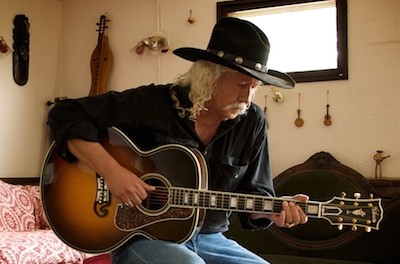 NEWTON, NJ  – Legendary folk music icon Arlo Guthrie brings his Alice’s Restaurant 50th Anniversary Tour to The Newton Theatre on Saturday, May 7, 2016 at 8:00 pm. Tickets will go on sale to the general public on Friday, January 22nd at 10:00 am.

The tour celebrates the 50th Anniversary of the event that inspired the seminal song, Alice’s Restaurant Massacree. A musical monologue running more than 18 minutes, Alice’s Restaurant has become a Thanksgiving holiday anthem to families across the globe, which originated from Guthrie’s experience on Thanksgiving in 1965. Guthrie will perform his most prominent work in its entirety each night of the tour.

“I didn’t think I was gonna live long enough to have to learn Alice’s Restaurant again,” Arlo Guthrie says with a smile. “It was a quirky kinda thing to begin with. Nobody writes an 18-minute monologue expecting fame and fortune. The initial success of the song really took me by surprise more than anyone else. The fact that I have contended with it for five decades either by having to learn it again or by not doing it, has been an interesting balancing act. I’m surely looking forward to adding it to the repertoire though for the 50th anniversary tour”.

For the last five decades, Arlo has carried on the Guthrie family legacy of sharing timeless stories and unforgettable classics to audiences far and wide. The tour brings together an ensemble of fine musicians ever to grace the stage at one time, including Terry “A La Berry” Hall (drums), Bobby Sweet (guitar, vocals), Darren Todd (bass), and his son, Abe Guthrie (keyboards). Arlo’s youngest daughter, Sarah Lee Guthrie will open the show. Each show is curated with an awe-inspiring light show created specifically for this tour, along with previously unseen images from the Guthrie archives. The images were chosen from more than 75,000 photos that had recently been digitized.

Alice’s Restaurant has staying power, being just as relevant today as it was when Guthrie wrote it. It’s now woven into the fabric of American culture. Fans have embraced Alice’s Restaurant as part of their annual Thanksgiving tradition, but also view it as one of the more pronounced anti-war rally songs. Every year, Arlo receives handfuls of letters from Vietnam vets and soldiers currently at war expressing their heartfelt connection to the song. However listeners interpret the quintessential tune, we can be assured that people of all different walks of life come together singing that famous chorus, “You can get anything you want at Alice’s Restaurant…”

Alice’s Restaurant‘s hilarious account of actual events that precluded Arlo Guthrie from military service (1966), became a platinum selling record (1967) and full-length motion picture (1969) at the outset of his lauded career. Here we are 50 years later commemorating the lengthiest hit single in music history. Due to its length, Arlo has only performed the complete Alice’s Restaurant Massacree on the 10-year anniversaries.

On Alice’s Restaurant becoming such a cultural phenomenon, Arlo says, “Well, I’ve always loved good stories and I’ve loved telling tall tales. Why people enjoy it is beyond me. I haven’t sung ‘Alice’ for years and people still keep coming to the gigs. ‘Alice’ has taken on a life of its own and become attached to Thanksgiving. If I had to guess though, maybe because it’s a story about a little guy against a big world.”

Don’t miss Arlo Guthrie in one of the final performances of this special anniversary show, presenting one of America’s greatest musical treasures!