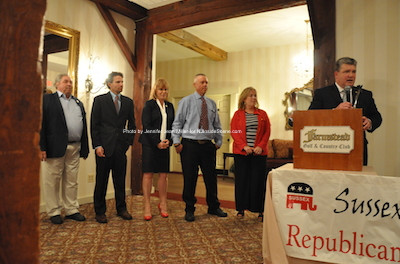 Space’s and Phoebus’ Republican contenders were Marie Bilik and Nathan Orr, who each earned 1,696 and 2,009 votes respectively.

On the Democratic ticket for the Assembly race were Michael F. Grace and Jacqueline Stapel, who received 877 and 887 each of the vote.

In the freeholder race, incumbent Dennis Mudrick was unseated with 3,713 votes and his running mate Frankford Mayor Gary Larson garnered 3,716. Earlier in the vote count, however, Larson held a brief lead over Lazzaro, when Larson held 1,678 votes to Lazzaro’s 1,675. However, the tide turned when 83 of the 119 precincts reported results and Lazzaro’s count superseded Larson’s 2,289 to 2,211.

There were no representatives of the Democratic Party who ran for the freeholder race.

Senator Steve Oroho presided over an event at the Farmstead Golf & Country Club where supporters flocked to from across the county, and he had special remarks for all the winners. “I want to congratulate all the winners. The Republican Party are winners. We have a lot to look forward to in November.” 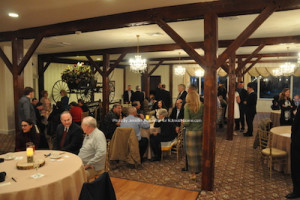 Supporters and candidates from throughout the county wait for the results. Photo by Jennifer Jean Miller.

Oroho gave a special thanks to Alison Littell McHose, who was waiting for the primary election to officially give up her seat on the assembly, which she resigned from but has been holding dual roles since Jan 1, when she was sworn in as Franklin Borough’s new administrator. McHose described her feelings as “bittersweet.” 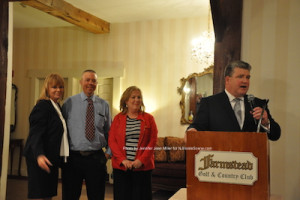 “I’d like to thank Freeholder Graham,” said Phoebus. “We’ve seen a great success and see the county moving in a positive direction.”

“George Graham is a great freeholder, but he’s a better friend,” Lazzaro stated, presenting Graham with a t-shirt at the podium. 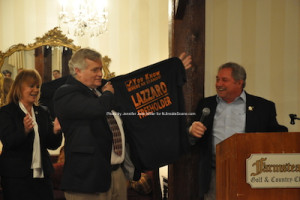 Freeholder George Graham holds up the shirt that Carl Lazzaro presented to him as Gail Phoebus looks on. Photo by Jennifer Jean Miller.

Lazzaro also praised Rose, who he described as “sharp,” and said, “he has ideas, he’ll grow,” describing Rose as the “future of Sussex County.”

Of the residents overall in the county, Lazzaro said, “The people of Sussex County are the finest we’ll ever find.”

All winning candidates in all the races will still need to vie for their seats in the November election. 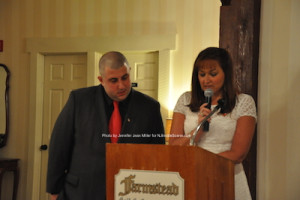 In the municipalities, two races many eyes were on were the Franklin Borough Mayor and Council races. The run for mayor took place between incumbent Paul Crowley and Councilman Nicholas Giordano. Giordano unseated Crowley 378 votes to 199. In the run for council with two seats available, Michael Rathbun and Gilbert J. Snyder took the race with 330 and 327 votes. Stephen M. Skellenger earned 236 votes and Frederick Babcock 200.

If Giordano wins the seat in November, he is reported to be the borough’s youngest elected mayor. Giordano ran with Rathbun and Snyder, and said of the win, “It’s a convincing win, teamwork is important.”

One of the other big races in the county was in Andover Township. The current mayor Michael Lensak was unseated in the primary with 274 votes, with Janis McGovern carrying 346 votes and Ellsworth E. Bensley, Jr. with 312 votes.

For a full results report, click here for the Sussex County Clerk’s report. The results are unofficial until they have been fully certified by the clerk’s office. 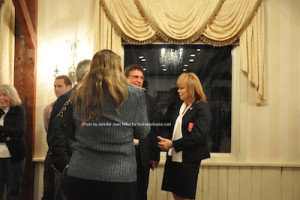 Gail Phoebus (right) waits for the results at the Farmstead. Photo by Jennifer Jean Miller.

At the Farmstead event, a special thanks was also given to Ailish Hambel, the Sussex County GOP Chair who has officially submitted her resignation as of June 10 after serving as chair since 2009. Hambel was not present at election night events. The GOP has 30 days from June 10 to find a successor for Hambel’s seat.