Attorney for MNA Newton Realty, David Wallace, requesting that the board reopen the application for a revote. Photo by Jennifer Jean Miller.

NEWTON, NJ – In spite of a denial with prejudice against its application at a special Oct. 8 planning board meeting, MNA Newton Realty, the company that had hopes of building a Taco Bell on the corner of Hamilton and Water Streets, was officially denied a chance for a revote at the Wed., Dec. 16 Planning Board Meeting.

The planning board had plans to memorialize the denial of the site plan approval, bulk variance and waiver relief that MNA sought over a period of four meetings, including Jul. 15, Aug. 19 and Sept. 23. However, legal counsel for MNA, David Wallace approached the dais and asked the planning board for a revote before they voted the denial into record.

Wallace’s clients remained in the lobby during the meeting as Wallace spoke on their behalf. He followed up on a Dec. 3 letter that he had sent to the Town of Newton regarding votes that had been reopened in other cases. Part of his dismay was that two voting members had excused absences from the meeting including Newton Town Manager Thomas S. Russo, Jr. and Ernest Hemschot, the board’s alternate. 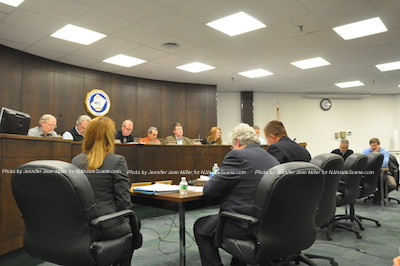 The planning board overseeing the meeting. Photo by Jennifer Jean Miller.

There were three votes at the Oct. 8 meeting, the first two resulting in tie votes (a vote to deny the site plan with a bypass, and then the bypass with other items factored in), which did not carry. The third vote for the site without the bypass, presented six “no” votes and two “yes” votes.

Board attorney David Soloway did not agree with Wallace’s letter, which cited land use law, but Soloway said left out a portion of the law.

“With all due respect to Mr. Wallace that quote [in the letter citing land use law] is wildly out of context,” Soloway said.

Soloway said that the board does not have the right to reopen the vote because it was a tie.

“The applicant doesn’t get a do-over since everyone was not here,” Soloway added.

Soloway said the only instance where an applicant may have a revote is if there was alleged fraud or impropriety anywhere in the process.

Wallace said one of the reasons for the revote was for the “interest of justice.”

When asked by board members what Wallace meant by “injustice,” Soloway replied, “I don’t know what he means, a tie vote is not an injustice. You don’t get another bite at the apple. There’s no injustice here.” 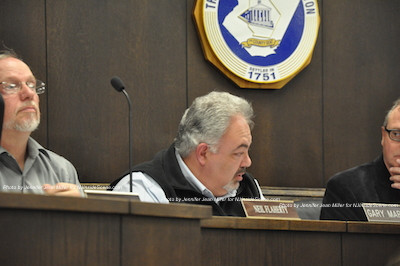 A couple of the board members, Gary Marion and Neil Flaherty noted that there was a quorum to vote at the meeting, which was also a special meeting per the applicant’s request. Soloway said that the applicant could have waited for the full board to be present and asked for the vote to take place then, but chose not to. Soloway added that the statute was very clear that the vote from Oct. 8 was the action.

Ricciardo said he did not see another way except that the board could reopen the application with agreement from the entire board. Chairman Greg LeFrois sought Soloway’s advice. Soloway recommended it not be reopened because there was no precedence and valid reason.

Ricciardo proposed a motion to reopen it and said if the motion was not seconded for a vote, it would simply die and the group would officially memorialize MNA’s application for site plan approval, bulk variance and waiver relief as “denied.”

Marion expressed that in the past the board “had not gone against Soloway’s expert advice and “it’s not the time to start.” 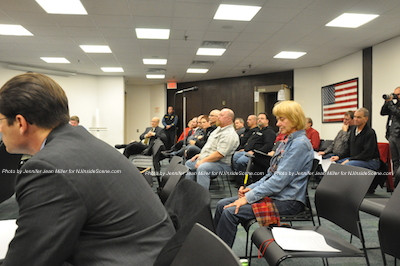 The audience during the meeting. Photo by Jennifer Jean Miller.

Ricciardo called for a motion to reopen the application and did not receive a second. The board voted unanimously on a resolution to deny the MNA application in its current form. Soloway told the members of the audience there who were in attendance to voice their objections against Taco Bell on that tract of land that the application would be memorialized as denied, and there would not be a revote. Many of the audience members applauded before leaving.

The board provided recommendations to the board of education on a courtesy review about generator purchases the board is seeking for Merriam Avenue School of 130kw, Halsted Middle School of 100kw and Newton High School of 130kw. The generators are planned for acquisition to protect the schools’ heating and cooling systems in case of outages, like in the case of Superstorm Sandy. The state is funding 46 percent of the cost. A discussion took place regarding the decibel levels, when the generators would be run, and the type of fencing used to surround the generators. With the Merriam Avenue School generator, arbor vitae was suggested to buffer noise, however an audience member, Blake Ellmont said a full review should be made about the type of buffer used because there could be an issue with combustibility.

Newton Board of Education. Photo by Jennifer Jean Miller.

New business was introduced including a minor subdivision at 36 Halsted Street. The Paterson Avenue Redevelopment Plan amendments were also reviewed. The town council had asked the planning board to review it. The planning board said that some language required revision, and the resolution for the plan should be adopted as long as it agrees with the town’s master plan. The plan will be up for discussion at the upcoming council meeting on Dec. 28 and involves the inclusion of a craft brewery at the Paterson Avenue site, which will include a tasting room. Planning board members asked questions about regulations, and hours of operation, with concerns about the sales and consumption aspect, and hours of operation, especially with the proposed business in close proximity to a residential neighborhood and the Merriam Avenue School.