Photo courtesy of the CPSC, depicting what can happen when a child is placed in a Nap Nanny within a crib or another enclosed area, for sleeping. The CPSC is urging consumers to not use the product, which is no longer selling in stores, but is found at garage sales, online auctions and as hand-me-downs. It is now not legal to sell this item within the United States.

HOPATCONG – An eight-month-old baby died in March after placing the child in a Nap Nanny inside of the child’s crib, according to newly released information.

The Nap Nanny is a reclining device where an infant can be strapped in to nap.

The Consumer Product Safety Commission (CPSC) has newly released the report about the baby’s death, which has since been broadcast with national news outlets within the last 24-hours.

The child in Hopatcong, according to the CPSC, was strapped in to sleep in her crib within the device, when the parents found her deceased.

Hopatcong Police Department never released an official press release at the time of the child’s death, in order to permit the family of the child time to mourn the loss of their child in privacy, but has since, with the national reports surfacing.

In December 2012, ABC News reported the CPSC had received 70 complaints at that point about the product, and by then, five infant deaths resulted from Nap Nanny usage. Major retailers including Buy Buy Baby, Toys R Us, Babies R Us, Amazon.com and Diapers.com, had recalled the product and offered refunds or store credit to those who purchased the Nap Nanny. The CPSC subsequently filed suit against the company, which went out of business two years ago, after selling approximately 165,000 Nap Nanny and Nap Nanny Chill items.

The photo featured in this article, courtesy of the CPSC, shows what can occur when a baby is placed within a crib in a Nap Nanny.

Although the product is no longer sold and has been fully recalled, the CPSC is warning consumers that units are still floating around at garage sales, on eBay, as hand-me-downs and more, and should be avoided and no longer used, emphasizing they are dangerous. It is actually now illegal to sell this product in the United States.

The company that manufactured Nap Nanny, Baby Matters, warned against using this product in cribs. 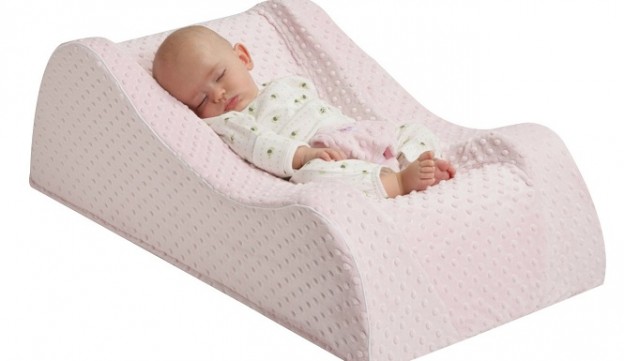 A Nap Nanny in its proper use.