NEW JERSEY – Assemblyman Parker Space and his running mate Gail Phoebus today announce their support for “Police Lives Matter!” and that they have written to Governor Chris Christie on behalf of law enforcement officers throughout New Jersey asking that he do the same.

“I have always been proud to stand with the men and women in blue,” said Space. “Gail and I were asked by police officers to try and get New Jersey to issue a similar declaration that the Texas Governor signed.” 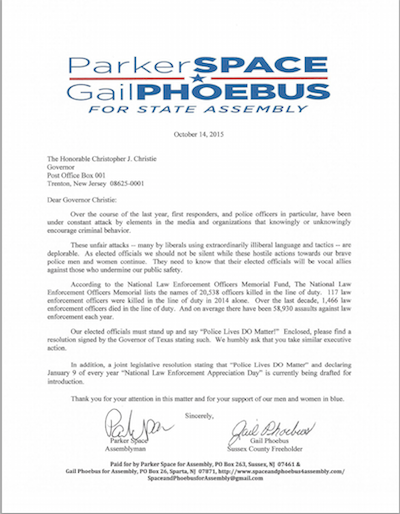 In addition, Space announced that a joint legislative resolution stating that “Police Lives Matter” and recognizing January 9 of every year “Law Enforcement Appreciation Day” in New Jersey is currently being drafted for introduction.

“This small token of appreciation will go a long way to show that New Jersey is proud of our law enforcement officers,” said Phoebus. “In addition to this show of support, if elected I will fight for pro-police legislation which Parker has helped initiate.”

Space and Phoebus cited their support of pro-police legislation to totally prohibit motor vehicle ticket quotas; require police departments to issue identification cards to those who retire in good standing so, under federal law, the retiree can carry a firearm across state lines; increase penalties for home invasions; and subject cop killers to the death penalty.

Attached, please find the letter to Governor Christie along with the Texas Governor’s declaration. 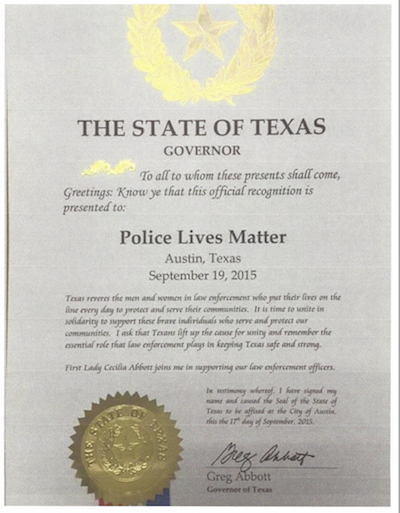 The declaration in the State of Texas for “Police Lives Matter.” Image courtesy of Parker Space and Gail Phoebus for State Assembly.