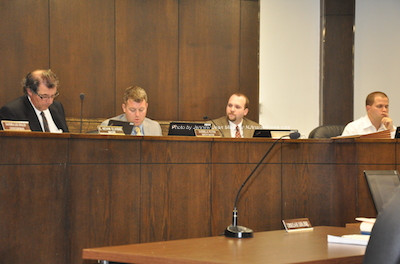 On Monday, June 8, the Town of Newton Town Council introduced the ordinance number 2015-19, which requires a revision to the ordinance’s section 307-55 to make Spring Street in the Downtown Newton area a one-way street.

Town Manager Thomas S. Russo Jr. explained on his blog on June 5, “The Town has already adopted a comprehensive ordinance for designating Spring Street as one-way; however the NJDOT requires an ordinance for strictly Spring Street for the Commissioner’s approval.”

The council voted for the measure to make Spring Street a one-way in January, which the council approved by a 4-1 vote. Councilwoman Sandra Diglio was the opposing voice at that time due to the issue of the traffic flow on the street.

The stretch of roadway referenced in the ordinance applies to Spring Street heading northwest from the Madison Street and Union Place vicinity to Route 206, for one-way designation. The segment with the new one-way designation will stretch an estimated 982 feet prior to reaching Route 206. Previous to the one-way, the approach to Spring Street via Sparta Avenue to the point of Madison Street, will remain a two-way traffic pattern.

The one-way was a choice to allow for more parking spaces, which will now be parallel on both sides of the street. New curbing, crosswalks and a decorative section by the Newton Fire Museum are among the plans.

In tandem with the one-way change on Spring Street, the Town of Newton is undertaking a revamping of Trinity Street, with the introduction of the ordinance for improvements, as well as a resolution on the consent agenda for traffic signals.

Ordinance number 2015-20 is a bond ordinance that was introduced and will be, like the ordinance for the Spring Street one-way designation, that will be up for adoption at the final council meeting of the month and for the year, under the current council structure (the Town of Newton will reorganize on July 1, with appointment of the new mayor and deputy mayor).

Resolution 88-2015 awarded the bid for the traffic signal improvements on Trinity Street to FAI-GON Electric Inc in Piscataway, NJ for $294,875.

Two additional resolutions were approved relating to the improvements project, but this time for Spring Street. Resolution 87-2015 awarded the bid for resurfacing and improvements to Spring Street to Tony’s Concrete of Newark, with a bid of $232,615. The town’s engineer Harold E. Pellow & Associates recommended the award to Tony’s Concrete, noting that under the Morris County Cooperative Pricing Council, the cost for the project will run $104,136.78 with a breakdown of costs that make the contract $336,751.78. Additionally, 100 hours of traffic control has been earmarked at $65 per hour, for a total of $6,500.

The last of the resolutions was number 89-2015, which allocates that Tilcon of Wharton, NJ has been officially retained to undertake the milling and paving on Spring Street for the one-way project. Under the price through the Morris County Co-Op, this will run $95,543.70.

There were concerns that merchants in town expressed about the construction. Rick Bitondo of Maxwell and Molly’s Closet had questions about the existence of a liquid damage clause, questions about management of the project, concerns how the project would be coordinated and an exit plan if it was deemed unsuccessful. 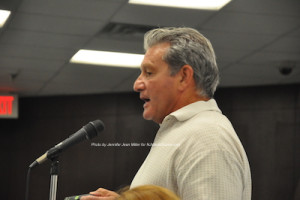 Russo answered the question about the liquid damage clause and said none were in place because it was through the Morris County Co-op. Deputy mayor Dan Flynn clarified that though there are “Tilcon skeptics” because of the project in Byram, they always come in as the low bidder on asphalt. Flynn said the paving contractor in Byram had other issues to contend with that caused the delays there.

Russo reiterated that the portion in Newton is a rather small job and that Tilcon had been used previously in Newton with “past success.”

Deputy Town Manager Debra Millikin also said that she would personally be present throughout the construction onsite and that Tony’s Concrete is a company that the town had worked with successfully before. She said that the biggest issue at the moment was setting the construction schedule, which would depend on the contractors. But, Millikin indicated, the town looked forward to moving as expediently on the project as possible.

Councilman Wayne Levante proposed the idea of working 24-hours on the project to shorten the length of time, understanding the concerns of the merchants. He was told that cost was the deciding factor and that night construction was not a possibility.

Milliken said that both parking and the sidewalks will be accessible during the construction.

In response to Bitondo’s question about an exit strategy, counsel Ursula Leo said that it is always a possibility, but would require DOT (Department of Transportation) approval to finalize. It would entail returning to two-way traffic, changing the curbs and restriping. If there was an exit strategy, it could potentially take six months to reverse.

John Vegas, one of the property owners on Spring Street encouraged the council to reconsider the one-way option. He said in towns he has spent time in Colorado there have been other options to have parking and two-way traffic on both sides. Vegas expressed concerns that the drop in vehicle traffic due to the one-way will be detrimental to the town. 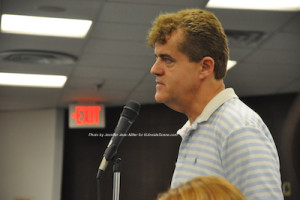 Business owner John Vegas asks the council to reconsider the one-way traffic and keep it two-way plus parking on both sides. Photo by Jennifer Jean Miller.

Resident Mike Alvarez’s concerns about the one-way reflected on safety and if emergency apparatus could navigate with parking on both sides. 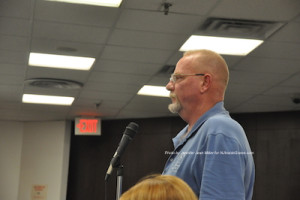 Resident Mike Alvarez asks about how emergency apparatus can navigate on the street with parking on both sides. Photo by Jennifer Jean Miller.

Bonnie Bitondo of Maxwell and Molly’s Closet thanked the town for investing in commercials and advertising to provide updates about the construction and that downtown businesses are open. She asked if the town could do more during the length of the project to reinforce the message.

Jonathan Andrews of the Downtown Newton Association offered his insights into improvements that could be made downtown, and presented photos to the council of things he had observed on Spring Street that should be repaired in different areas.

Mayor Kevin Elvidge reiterated the town’s support of the businesses and the town’s goal to stay on schedule with the construction.

“We don’t want to stretch it out any longer,” Elvidge said. 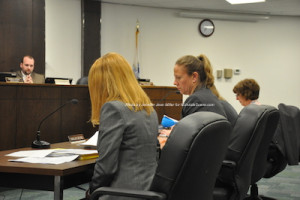 With another initiative intended to help businesses, planner Jessica Caldwell discussed the sign ordinance draft, which will help to better define signage, as well as facilitate the use of temporary signage.