NEWTON, NJ – The application that has been submitted to Newton’s Planning Board for a potential Taco Bell on the corner of Water and Hamilton Streets is being continued for a fourth meeting tentatively scheduled on Thurs, Oct. 8.

The topic has been a contentious topics for residents, as well as others since the project was first announced on July 15. As the second meeting was packed on Aug. 19, the room at the Newton Municipal Building was nearly full on Wed., Sept. 23.

Though there was testimony once again from the applicant’s engineer George Gloede, from G. Gloede and Associates, as well as well as Traffic Engineer Joseph J. Staigar of Dynamic Traffic LLC of Chester, many questions and apprehensions emerged from both the planning board and the public.

For members of the planning board, the issue of a bypass lane not having been drawn into the plans was of deep concern to some. At the previous meeting, Gloede said that a bypass was not something Taco Bell corporate advocated, and that they liked their customers to place an order so that people know one they enter the drive-through “you are committed.”

Gloede said that there was a reduction in seating from 40 to 30, with a change in the property line and curb line, with one parking spot lost.

Member Joseph Ricciardo asked if an end cap type of building could be designed, which Gloede told him those are only used in shopping plazas on the end of a strip.

When Ricciardo suggested his angst with the potential that the first aid squad or fire department could not enter the scene easily without a bypass lane if there was a medical emergency or fire, Gloede reiterated that there were constraints on the site, with Taco Bell not normally permitting bypass lanes into their designs.

“Taco Bell doesn’t set the standards in the Town of Newton,” Ricciardo added, with applauds coming from audience members.

The proceedings continued until about 11:30 p.m., with Mittal Patel of MNA Realty, the applicant, sitting in the front seat, hands tightly clasped as her experts testified on her behalf.

Ricciardo suggested to alleviate the bypass issue, there could be redesigns that would enable it, with reduction of one of the lines by seven feet, and another by five, which Gloede had responded that about 12 feet would be required to accommodate a bypass.

“It takes a little cooperation from Taco Bell, and a little from us,” Ricciardo added, noting relief could be offered in other areas.

During Staigar’s testimony, he testified that he conducted a traffic study on Thurs., Sept. 10 from 4 p.m. to 6 p.m. (with the peak time for Taco Bell anticipated between 4:30-5:30) and also on Sat. Sept. 12. from noon until 2 p.m. (with peak for Taco Bell expected at noon until 1 p.m.). During those peak times, they expected 33 cars in and 33 cars out on the weekdays. and 60 in and 60 out on the weekends during peaks. He also noted a decent amount of foot traffic potentially, though no estimate was given or study done. 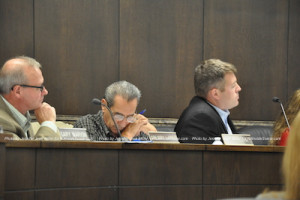 Planning Board members listen to the testimony. Photo by Jennifer Jean Miller.

While some have worried that traffic would increase on Hamilton Street upon exiting, Staigar anticipated it would only be local traffic, and between eight to 11 cars extra hourly.

Overall, he noted the average could be approximately 600 customers daily, equating to 4,200 weekly. The initial estimate was less than had been reported previously, with Staigar predicting most of the customers would be “pass by” traffic. Previously reported estimates were 5,000 to 7,000, with Staigar suggesting his estimates more realistic.

He estimated the road would handle about 300 more cars a day because of Taco Bell, with about 75 percent of the customers utilizing the drive through.

The applicant’s attorney David Wallace was attempting to have the matter wrapped up that evening preliminarily, contingent on the bypass, because of a time-sensitive property purchase issue that the County Seat’s owner was dealing with. The approval of the Taco Bell project would domino to the County Seat’s transaction with MNA Realty, and the County Seat owner could then take on another real estate transaction it was engaging in. All was dependent on the approval.

But the planning board was not so ready to move. Member Dan Flynn, also Town of Newton Mayor, had noted that the board had overextended itself already for the applicant, and turned to Ricciardo asking him he was paid to design the bypass lane that he suggested.

Staigar said in one instance the bypass was a “waste of pavement” in most cases, with traffic in the front moving out in the case of an emergency, with accessibility increased. At the same time, he said they are designed more for customer convenience, which is why some like them, rather than safety.

Resident Wayne McCabe, who has a planning background, and has been a resident of 42 years, said he did not feel that the traffic would flow as smoothly as Staigar predicted, and many more would use Hamilton Street as an escape route, especially if traffic was backed up on Water Street, and then would continue to Moran Street to exit the area. 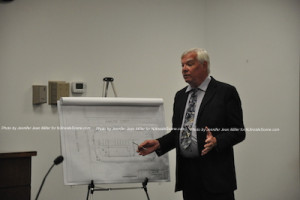 Discussion about the changes on the proposed Taco Bell. Photo by Jennifer Jean Miller.

Ed Muller from Hampton Township suggested that the Taco Bell would only create a ripple effect and worsen the traffic, with the area normally very congested, especially in the evenings, and people would bypass that area altogether, perhaps driving around onto Clinton Street, and avoiding the Water and Hamilton Street areas entirely. He said that currently the traffic backs up the hill onto Spring Street, and from the other direction on the weekend, it is often bumper to bumper from Lowe’s.

Staigar said that the traffic though would take time with cars flowing in a particular way that they move ahead, and then others catch up behind them, in ebbs and flows. Muller said that Staigar did not appreciate how it is to travel daily through Newton.

The rendering of the proposed Taco Bell’s exterior. Photo by Jennifer Jean Miller.

Earl Schick contributed that Taco Bell may be considered desirable to students in Sparta, Stillwater, Fredon and other areas outside of Newton. Young people, he said, in the Newton area patronize the Taco Bell in Ledgewood currently, and will travel to enjoy their meals. For Kittatinny Regional High School students, he said they typically travel to areas like Pennsylvania in Taco Bell. For these kids, he said that it is worth their ride to travel together for a $5 meal each as a group. Schick believed that the Taco Bell in Franklin would not be as desirable to visit, and had concerns about the increase in traffic through town with more students. Staigar countered it and still stuck with his estimated 4,200 weekly.

The builder also discussed the design of the building, noting that there would be a small second floor to accommodate management office space, though the original design would not be much different than the look of the original design. With the reduction of the building size, the office on the second floor would be required. However, the previous design had the appearance of a second floor. He said the siding would have powder coated dark bronze metal slats, and subtle purple hued lighting. 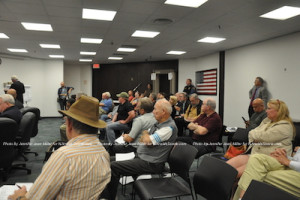 Attendees at the meeting. Photo by Jennifer Jean Miller.

McCabe noted that the reintroduction of these new plans had not been reviewed yet by the public, and could not be voted on tonight, since they must be available for review in the municipal building ten days prior. Chairman Greg Le Frois agreed and said that nothing would be voted on that night. Schick asked about the difference in height for the Taco Bell and how it might impede Aberlour residents. He was told the height is an additional eight feet, and would actually present less of an impact for those at Aberlour. Additionally, that the menu board and the speaker location would be in an area, and employees would have self-adjusting headsets, to reduce noise.