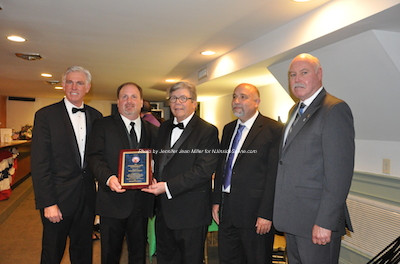 The 2015 Grand Marshal for the Sparta Fourth of July Parade William P Curcio is presented with a plaque by Anthony Alfonso of the Sparta Elks. Both are flanked by past grand marshals. From left to right: Robert B. Nicholson, III (2009), Alfonso, Curcio, Jerry Morelli (2011) and Gil Gibbs (2014). Photo by Jennifer Jean Miller.

SPARTA, NJ – A lively group gathered for the festivities to honor William P .”Bill” Curcio on Saturday, July 20 for the Sparta Elks’ annual Grand Marshal Dinner. Curcio was chosen as the Sparta Elks Distinguished Citizen of the Year and this year’s Fourth of July Parade Grand Marshal.

At the black-tie event held at the Sparta Elks Lodge, in addition to honoring Curcio, the attendees enjoyed a special dinner, music and dancing to round out the evening. 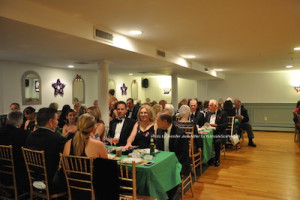 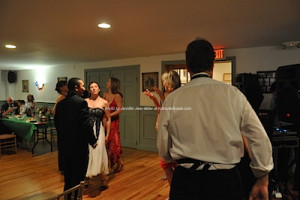 Guests hitting the dance floor at the event. Photo by Jennifer Jean Miller. 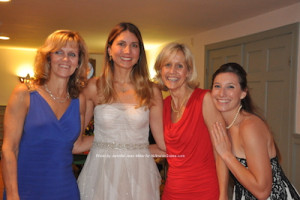 Several of the guests take a break from dancing. Photo by Jennifer Jean Miller. 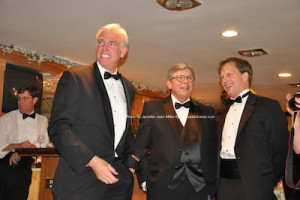 Guests with Bill Curcio watch the dancing and enjoy the festivities. Photo by Jennifer Jean Miller.

Anthony Alfonso was the event’s master of ceremonies, with the invocation performed by the lodge chaplain Arthur Murch. John Considine led in the flag salute and Exalted Ruler Christa Considine welcomed the attendees. 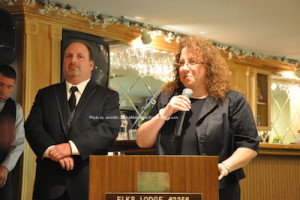 Curcio was chosen for his longtime commitment to the community in community affairs and has become known as a pillar in the business community as well, with outreach to Sparta residents through both.

Curcio and wife Marion have been Sparta residents for close to 40 years, raising both children Marisa and Christopher in Sparta. 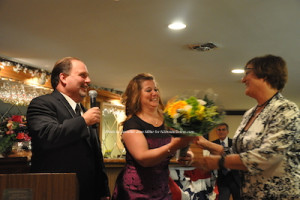 Marion Curcio is presented with a bouquet. Photo by Jennifer Jean Miller.

Curcio is Eastern Propane Corporation’s Executive Vice President and the Chair of the State of New Jersey Liquefied Petroleum Education and Safety Board, the Director of the New Jersey Propane Gas Association, plus a board member of the Employer Association of New Jersey.

In Sparta, he has served as the town manager, was involved with Sparta Little League and its board, led Sparta Chapter of UNICO National as its president, served as a past chairman of the Sussex County Chamber of Commerce, was a trustee at Sussex County Community College and also served on the Sparta Board of Education. 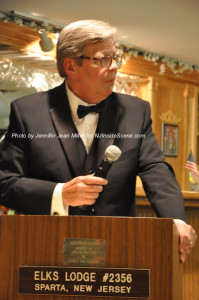 Bill Curcio at the podium during the dinner. Photo by Jennifer Jean Miller.

Throughout the county, Curcio has been involved in a number of initiatives like the Walk for the Cure, Juvenile Diabetes Research Foundation, the Sussex County United Way, the Sparta Jaycees and the Sussex County Rail Task Force.

He has volunteered his time as well in Sparta with the Little League Program, having been the coach of The Crees, with his team headed to the All Stars. He was a founder of the Sussex County Junior American Legion Baseball Program, and served as the chair for the State Little League Championship Tournament.

During his time as emcee, Alfonso shared about the activities of the Sparta Elks Lodge #2356, which has been in existence in the community since 1966.

“Sparta Lodge is probably the third or fourth smallest lodge in the State of New Jersey, but we are by far one of the strongest,” said Alfonso, especially focusing on the lodge’s commitment to helping the youth and veterans of the area.

The Sparta Elks coordinate sports programs and leadership programs for area children. They also work with veterans, visiting them in hospitals, collecting items to send overseas to troops and fundraising for families of those in the military who were wounded or are deceased through the Army of Hope Committee.

“As long as there are veterans, the Benevolent Order of Elks will never forget them,” is something the Elks repeat often.

The Sparta Elks also sponsor children with special needs to be able to attend camp at Elks Camp Moore, which includes a heated wheelchair accessible pool.

Prior to Curcio being awarded as a nominee, there were two guest speakers, who were former grand marshals. The first was the 2014 grand marshal, Sparta Township Councilman Gil Gibbs. Robert B. Nicholson, III, President of Eastern Propane, was another guest speaker at the event and was the 2009 inaugural grand marshal, after the Sparta Elks began coordinating Sparta’s Fourth of July Parade.

Gibbs thanked the Elks for taking over the parade, on behalf of the town and town council. “You guys do a most incredible job,” he said. He led the group in a round of applauds for the Elks. 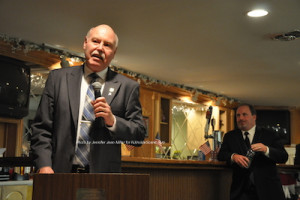 Gibbs also talked about the Elks’ Top Soccer program in Sparta, that is a six-week program for special needs children. Top Soccer has been in existence for five years and runs Saturdays, with the program participants also enjoying a Halloween party, with the Elks donating the funds for it.

“It’s absolutely amazing,” he said, adding the importance of donations too to Camp Moore, with his nephew having been an attendee at the camp.

Gibbs focused next on Curcio, describing Saturday breakfasts that both have attended over the last five years since they have met. Since their first meeting, they continue to meet each Saturday for an hour and a half for breakfast.

“He’s the most incredible guy I have ever met,” Gibbs said. “He’s smart, he’ll help you out with anything you want.”

“You’re well deserving,” Gibbs told Curcio of his award. “I appreciate you as a true friend for everything you’ve done for me for the last five years.”

Nicholson took time at the podium, first thanking the Elks for their dedication to their community initiatives, as well as their annual coordination of the parade. 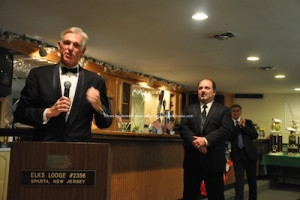 Robert B. Nicholson III speaks about the Elks and their programs within Sparta. Photo by Jennifer Jean Miller.

“Without them, there’s a chance that about six years ago, you wouldn’t be seeing an Independence Day Parade in Sparta anymore, and that’s been a tradition I’ve looked forward to all my life every Fourth of July,” Nicholson said.

Nicholson encouraged the attendees to visit Camp Moore as he had, noting it would “do a heart good.”

“You’ll recognize the incredible work that these people do,” and asked everyone to stand and give the Elks an ovation. 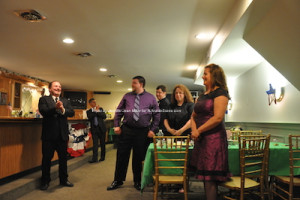 The Elks recognized for their work in the community. Photo by Jennifer Jean Miller.

Nicholson reminisced about Bill, telling stories about the years they have known one another. Nicholson also took a sign with “William P Curcio” emblazoned on it, enjoying a play on words with an acronym of Curcio’s name for each of the letters of it.

With the final letter “o” in Curcio’s last name, he told the crowd that it stood for “outstanding.” 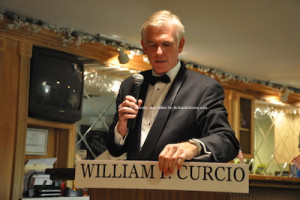 Robert B Nicholson III gives a word meaning for each letter in the name, “William P Curcio.” Photo by Jennifer Jean Miller.

“I am honored to have spent 33 years with Mr. Curcio,” Nicholson said. “And to have known his family. And all the time they’ve been here, and a better family, there isn’t.”

Curcio’s family shared the head table, which also included in addition to his wife and children, his sister and brother-in-law, son-in-law, daughter-in-law and grandchildren at the event.

Alfonso introduced Curcio and presented him with his plaque. 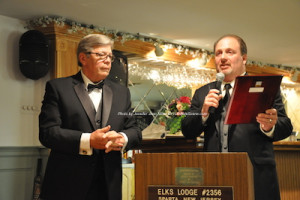 Curcio thanked everyone for their attendance and the Elks for their many acts of services. Curcio emphasized that along the way he has had help from others to reach his achievements, including his family. 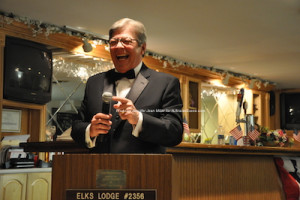 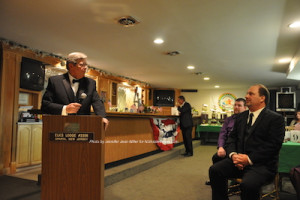 “Things that you do you should always hope and wish that they will be better after you leave, and that the people will continue that process in a much more successful way,” Curcio concluded.