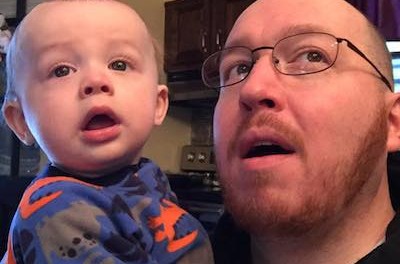 Charles Flartey and his son Tommy have become viral on YouTube with videos where Charles sings remixed versions of popular songs during Tommy's mealtimes. Facebook image courtesy of Charles Flartey.

HOPATCONG, NJ – When it’s time to eat in the Flartey household for Tommy, the littlest family member, he enjoys serenades served up with his meal.

The musical entertainment is courtesy of his dad, Charles Flartey, a Hopatcong native and gifted vocalist who sings with the band The Yes Yes Yalls and is expected to release his first solo album “The New Old Fashioned Way” this month (he is also known by his stage names Charles Only and Shameless Plug).

Though music is currently his side gig, Charles has expanded into another direction with his sound ventures and a new, regular engagement, with Tommy alongside of him. On Charles’ Facebook Page, he comically describes himself as “father, husband (his wife is Melissa), singer, rapper, writer, promoter, bartender server, amateur politico, professional human.”

“I sing funny songs to him all day long,” Charles told NJ Inside Scene, of his song creations for his son.

When Tommy graduated to eating solid foods, Charles began ad-libbing his own song parodies for Tommy while he sampled a range of new cuisine. From there, Charles made a decision that has since changed it all.

“It seemed funny enough to turn on the camera,” he recalled.

He started shooting videos of their interactions about two months ago and then began posting videos of the father and son melodic escapades as Facebook videos, receiving a warm response from connections on the social media site.

“Everyone kept telling me to get it out to YouTube,” he said, which prompted him to create his channel, “Charles Only.”

His videos received a viral reception from there, which landed him an interview with Inside Edition, recognition on Good Morning America, and a feature story on TODAY Parents.

Yahoo! News found the story so fascinating it ripped it from Inside Edition.

Local outlets have picked up his story too including the Daily Record, Patch and NJ.com.

The story has also made a global reach with the Huffington Post in the UK sharing the story on its “Family Time” section.

The song remixes have created a bonding experience between father and son, reminiscent of memories that Charles said he enjoyed of his own childhood, singing along to music in the car with his parents.

“You wanted a snack and I said fine. In your dreams you’ve eaten this a thousand times. You sometimes see it walk outside your door. Jell-O…is it me you’re looking for?” Charles asked Tommy in one video, remixing the Lionel Richie classic “Hello,” as he spooned out some of the shimmery treat along with his song, to Tommy’s delight.

Tommy wasn’t the only fan of this video since it’s garnered currently more than 112,000 views, plus Rumble Viral, a viral video channel, contacted Charles to feature the video on its channel.

Tommy especially reacted with giggles to his dad’s version of R. Kelly’s “Bump N’ Grind,” instead singing, “I don’t see nothin’ wrong, with some yogurt for lunchtime.”

Gwen Stefani’s “Hollaback Girl” enjoyed some recent time in the spotlight with Charles’ version, which has enjoyed more than 20,500 views.

The Temptations’ classic “My Girl” has a new lease on life with Charles’ version called “Pancakes.” Here, he and Tommy face the camera, with Tommy weaving back and forth to his image in the camera, as dad sings, “I guess you’d say, what can make me feel this way? Pancakes…pancakes…talkin’ bout pancakes. Pancakes.”

(Coincidentally, another local youth Elladia Jones, appeared in a preview of this video with her Tide commercial. Click here for Elladia’s commercial reel).

The Wu-Tang Clan song “C.R.E.A.M.” has been remixed into “Cream of Wheat rules everything around me,” with Tommy rapping with dad, “cream gets the money. Cream o’ cream o’ wheat ya’ll.”

Some of the songs haven’t hit YouTube yet, including one with Charles singing about rice cereal to Tommy to The Beach Boys, “Wouldn’t It Be Nice” as “Wouldn’t It Be Rice.” .Another spoof is with a friend and Counting Crows “Mr. Jones” with a parody of his performance with Tommy dishing out applesauce.

Charles said he has been receiving some requests for songs, and those on YouTube have commented that he should continue with his song making, since it’s creating bonding between the viewers and their own children.

All of his songs, Charles said, are ad-libbed.

“It’s very spontaneous,” he said. “If I think about it, it would be too hard.”

Tommy celebrates his first birthday tomorrow, and Charles said he is planning a special song for the occasion.

When asked if Charles started singing to Tommy because he may have been fussy about eating a particular food, Charles replied, “no,” and said in terms of his meals Tommy “enjoys a little bit of everything,” with bitty pieces of bologna one of his recent tries that the one-year-old likes.

“He kind of enjoys everything,” said Charles. “He just enjoys when I sing.”