On July 29, 2014 the Franklin Police Department investigated a theft complaint. 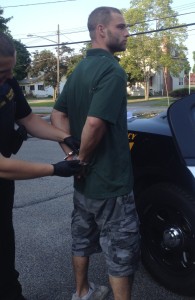 Investigation resulted in the arrest of Brett L. Hosking, 28, of Hamburg New Jersey.

While being taken into custody Mr. Hosking was found to be in possession of a controlled dangerous substance.   Mr. Hosking was arrested in Hamburg on 7/29/2014, without incident, and charged with receiving stolen property as well as possession of a controlled dangerous substance. Bail was set at $35,000.00 with no ten percent option.

Mr. Hosking was lodged in the Sussex County jail in lieu of bail.

Throughout the course of the investigation contact was made with a victim. More victims are expected to come forward.  Anyone who experienced a loss under similar circumstances described is asked to contact Detective Robert Vander Ploeg of the Franklin Borough Police Department at 973-827-7700 extension 237.