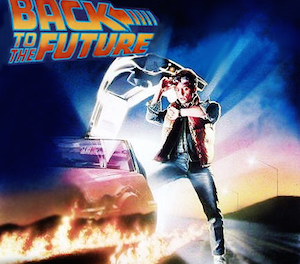 Michael J. Fox on the "Back to the Future" soundtrack cover. Fair use image.

NEW JERSEY – “Where we’re going we don’t need roads,” was the shocking revelation unveiled to fictional characters Marty McFly and his girlfriend Jennifer on the fictional Oct. 26, 1985.

Many Gen X’ers sat in movie theaters in New Jersey and across the country, chomping on popcorn as they watched Marty surf across time, transported by a wiry haired scientist in a silver DeLorean. First from 1985 and then to 1955 and back, where he helped to save his life from disaster, which would have prevented him from being born.

Thirty years ago, Back to the Future emerged onscreen with this fun time travel escapade. The film has remained a classic enjoyed by the generations who watched it on the big screen, as well as those not even born when it hit the theaters.

Later, in 1989, the Steven Speilberg sequel was released with Marty McFly (Michael J. Fox) thrust into the future to clean up situations impacting his descendants, beginning on the fictional Oct. 21, 2015 at 4:29 p.m.

Today, many are celebrating this day in real life and time, which marks a unique view of cinema history, cementing, Wed., Oct , 21 2015 forever on the calendar. There is even a website marking it (click here to view). 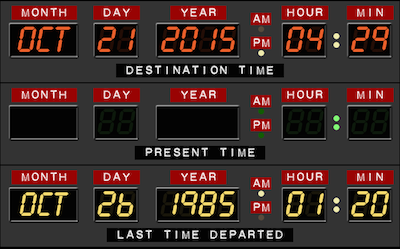 Click below for some interesting videos on the topic that has generated discussion. We still don’t have hoverboards or flying cars, or even flying cars that run regularly on banana peels and other types of compost, but who knows what this future now holds for future generations.

Movie Clip from the famous scene:

The official trailer for “Back to the Future Day.”

Editor’s Note: When the author of this story was on assignment for Straus News in 2010, she had the opportunity to attend a commercial filming with a Back to the Future theme at The Chatterbox Drive-In. Click here for images of that fun event.