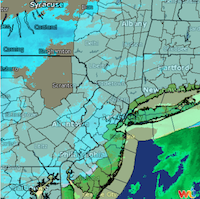 Weather radar from Jan. 26. The green band along the coastline denotes areas where the Blizzard Warning is in effect. Image courtesy of Weather Underground.

NEW JERSEY – Governor Chris Christie has declared a State of Emergency for New Jersey, with State Offices closing at 1 p.m. and those offices officially closed tomorrow, Jan. 27, due to the storm.

New York’s Governor Andrew Cuomo declared a State of Emergency as well, according to NBC News, for parts of the state south of Sullivan County, and suggested that the New York State Thruway and other state highways may close this evening by 10 p.m.

In Connecticut, Governor Dannell Malloy instituted a travel ban for the state, along with the State of Emergency.

New York City Mayor Bill de Blasio urged his followers via Twitter early today, “If you’re going to work today, please head home early – and take mass transit when you do. Stay off the roads as much as possible.”

His follow up tweet advised: “The City is doing everything we can to prepare and keep New Yorkers safe.”

The mayor shared some tips for New Yorkers from the City’s Office of Emergency Management.

A State of Emergency signifies that all, except essential personnel, should stay off of the roads due to potential hazardous conditions.

A Winter Storm Warning still remains for Northern New Jersey, with snow heavier as the day progresses and through Tuesday morning, when several inches an hour could be expected. Snow is expected to taper by Tuesday afternoon.

In New York City, Long Island and Southern Connecticut, a Blizzard Warning has been declared, from 1 p.m. today and through midnight Tuesday night. Snowfall in these areas may be between two to four inches per hour, with 18 to 24 inches predicted for the duration of the storm. A Blizzard Warning denotes severe weather conditions, including heavy snowfall and strong winds, with potential whiteouts. Power outages due to downed tree limbs could be possible. Travel is not recommended and for those who must, it is recommended to carry a winter survival kit (see link with tips from the New York City Office of Emergency Management).