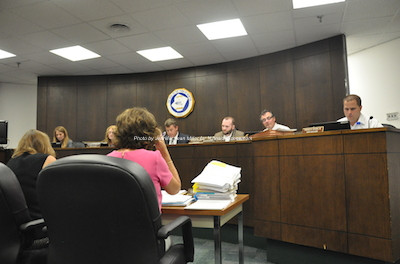 Newton's Town Council at the meeting on Aug. 24. Photo by Jennifer Jean Miller.

NEWTON, NJ – “This is a revolutionary event happening,” said councilman Kevin Elvidge. “This is a perfect example of everyone working together. It’s huge. It’s a starting point.”

A shuttle bus service between Sussex County Community College (SCCC) and the Town of Newton has been a topic for discussion for many years. The shuttle bus is proposed to run between the college and Thorlabs, weekly Tuesdays through Fridays. It will take approximately five loops between the hours of 11 a.m. to 2 p.m. on those days. Potentially discussed locations for stops include: SCCC Performing Arts Center, the school’s E Building, the plaza with Dominick’s, the Krave/Quick Chek area, Thorlabs, Spring Street, Hayek’s, the Authentic Pizza plaza and then returning to the college.

For those with SCCC and Thorlabs identification cards, the shuttle bus will be free.

The tentative start date for the shuttle service to begin is Nov. 2.

“It looks like a home run for everyone involved,” said town manager Thomas S. Russo, Jr. who described that the college “seems very amenable” and discussions have been taking place between the town and specifically the college’s interim president Frank Nocella.

The town passed within its consent agenda a resolution that earmarks a voluntary code of conduct in the downtown, in order to foster a more family-friendly and safe atmosphere. Resolution number #137-2015 passed with unanimous approval from all council members. The code of conduct entails the following voluntary code that those visiting should abide by while in the historic downtown section of town and signage will be placed in the downtown to indicate the following:

The town presented Mary LouSchnurr Chair of the NORWESCAP (Northwest NJ Community Action Partnership) Board of Trustees with a proclamation in honor of its 50th anniversary. NORWESCAP developed as part of the Equal Opportunity Act of 1964, which was spearheaded by President John F. Kennedy and then carried out during the President Lyndon B. Johnson administration. NORWESCAP serves approximately 30,000 in the area with a range of anti-poverty programs. There are about 270 individuals who work with the organization full and part-time. The group is holding a 50th anniversary gala benefit at Fiddler’s Elbow Country Club in Bedminster on Sept. 17. For anyone who would like to attend call: (908) 454-7000, ext. 110. 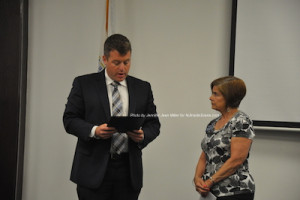 Another topic of discussion is the scheduling of a proposed Universal Health Fair next year on Sunday, Sept. 18, 2016 from noon until 5 p.m. Linda Mitchell of the Tree of Health Center proposed the area and it would feature a range of health services vendors, cultural exhibits and more. Ursula Leo the town’s attorney discussed some of the legal concerns with such an undertaking, which would require closure of the street (Mitchell requested Spring Street for the event). Leo said that additionally there would need to be overtime for groups like the DPW, charged with clean up after the event, food services certificates necessary from the county, and liability insurance is required. Elvidge suggested involving downtown groups like the DNA (Downtown Newton Association) and merchants. Councilwoman Kristen Becker said that if it was not suggested to have it in the downtown due to closure of the street, to host the event in “another welcoming area” in town.

Xavier Izquierdo of AzulCore discussed the social media initiative that his company is coordinating with the Town of Newton’s community Facebook, Twitter, YouTube and website, that provides information about businesses and events under the websites, newtonnjcool.com and gonewtonnj.com. Izquierdo explained that his company has implemented several changes to the town’s social media based on analytics he has gathered from what viewers seem to be drawn from. That included a change in the town’s logo based on the viewer response to posts with the maroon color, a theme for Newton. He said that hashtags including the #NewtonNJ especially has strengthened the town’s presence on the worldwide web overall and the visibility of its social media posts. 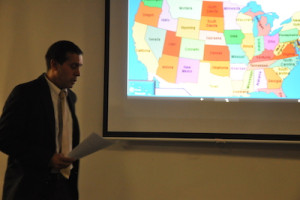 Members of the Newton Fire Department are currently at Pierce in Appleton, WI discussion pre-construction details for a new fire truck for the town. The next group will visit during the construction phase in Jan. or Feb. 2016.

Russo said that one of the initiatives the town is discussing is free Wi-Fi in the downtown area. Other communities including Englewood have implemented it and Russo is speaking with the vendor that handles the project. “There’s a generational shift,” Russo said, with how especially younger generations gather this information. “We embrace it or we’re going to fall behind.”