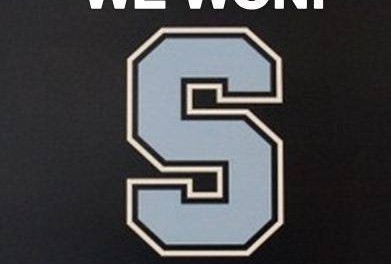 It has been an exciting season for the Spartans, who closed out their 2013 season with only one loss.

At today’s game in East Rutherford, Sparta swept their victory, 7-0 in the first quarter, then 20-0 in the second.

Sparta’s Deputy Mayor Molly Whilesmith, who was at the game, said, “Fans were thrilled by half time with the lead, yet apprehensive. Last year, the Spartans had a huge lead going into half time, and the opponents caught up in the second half, and nailed the win with an amazing field goal.”

This time, returning to the field following half time, the Spartans continued where they left off, scoring another 13 points.

“By the fourth quarter, and an amazing lead, the Spartan crowd was euphoric,” Whilesmith said of today’s game.

By the end of the game, it was the Spartans over the Golden Hawks, winning by a score of 40.

Before today’s victory, the Sparta Spartans began making their way up the ladder, after facing the Maroon Raiders of Dwight Morrow High School of Englewood on Nov. 16, with a 46-14 victory. The Spartans held steady throughout that entire game against the Maroon Raiders with 7 to 7 in the first quarter, 13 to 7 at the end of the first half, and taking the rest of the game, 12-0, and then 14-0 the last quarter, taking the game, 46-14.

History repeated itself in Sparta’s next game on Nov. 23, versus the Ramapo Raiders. The Spartans took the first quarter 13-7, then swept the second quarter, 13-0. In the third quarter, the Raiders regained momentary momentum, taking the Spartans 7-0. However, the Spartans showed the Raiders who was boss in the fourth quarter, kicking them to the curb with a 20-0 victory, for a final score of 46-14, for the Spartans.

It was an exciting return to town for the Spartans following today’s game. Whilesmith and Quinn were part of a procession of more than 30 vehicles, including Sparta Chief of Police, Ernie Reigstad, the players, and Sparta Fire, Police, and Ambulance vehicles.

“Last year, the team made the Championships and were escorted out of town by lights and sirens,” Whilesmith added. “They lost. They had the offer this year and refused, due to superstition. Instead, this year, they won and were escorted back into town by every available emergency vehicle.”

After passing through the Lake Mohawk Plaza down Winona Parkway, the Sparta Spartans headed to Sparta High School, where they were further greeted by hundreds of cheering parents, and fans.

In the Non-Public Group 3 playoffs, Pope John XXIII Regional High School made it to today’s championship, but the St. Joseph Regional High School Green Knights from Montvale, beat the Lions at MetLife Stadium, 62-14. The Lions fought a valiant battle during the season, walking away with the victory against the Bishop Ahr High School Trojans of Edison NJ on Nov. 16, 53-0. In Pope John’s second game, the Lions squeaked into the finish against the Delbarton High School (Morristown, NJ) Green Wave) on Nov. 23, 14-13.

“I really wish Pope John won,” Whilesmith said. “It would have been awesome to have two high schools from the same town win. It was amazing enough that both made the championships for their leagues.”

“This is a proud moment for Sussex County,” said Jeff Beebe, who was not present at the game, but like many from the county, were following it from afar.

Beebe was Pope John’s Team Captain, when Pope John took the 1984 State Championships, and the Lions were ranked ninth overall in the State.

Other Sussex County Schools made it to the playoffs, with the Newton Braves challenging the Lenape Valley Patriots in the North 1 Group 2 playoffs, and taking the game on Nov. 15, 25-14. The Westwood High School Cardinals thwarted Newton on Nov. 22, 63-12. Kittatinny Regional was taken out in the first game, 48-7, on Nov. 15, when the Cougars lost to the North Warren Regional High School Patriots.