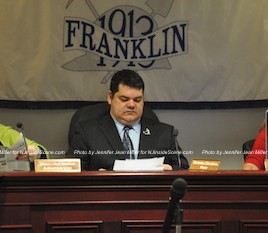 FRANKLIN BOROUGH, NJ – A standing room only crowd on Fri., Jan 1, 2016 joined members of Franklin Borough’s Council for the swearing in of the new mayor, two new councilmen and officers for the Franklin Fire Department and Wallkill Valley First Aid Squad. Newly sworn in mayor Nicholas Giordano also made nominations for boards and commissions members.

Giordano was first sworn in for a four-year term, followed with Michael Rathbun and Gilbert J. Snyder, both councilmen for three-year terms. 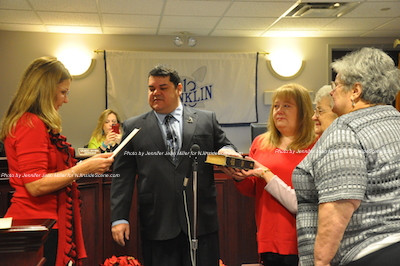 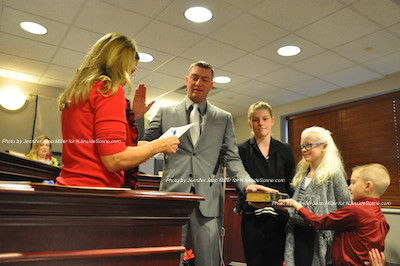 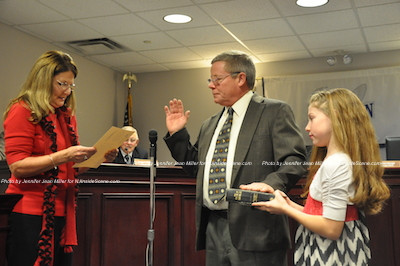 Fred Babcock from the Franklin Fire Department was sworn in next, followed with his line officers for 2016. The Wallkill Valley First Aid Squad officers also took their oaths. 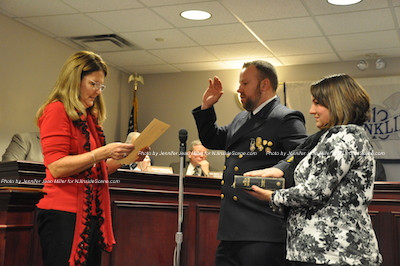 Chief Freddie Babcock takes his oath of office as his wife Michelle holds the Bible. Photo by Jennifer Jean Miller. 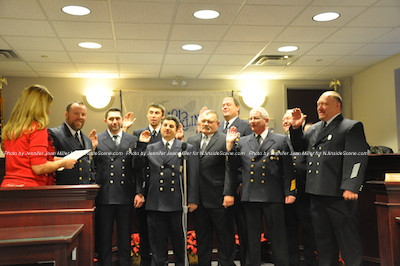 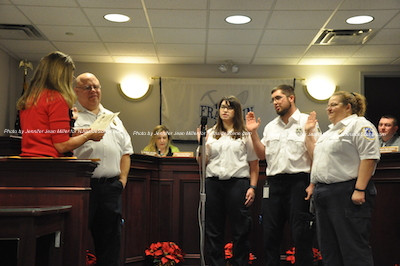 Among the new appointments this year was Tom Prol as borough attorney. 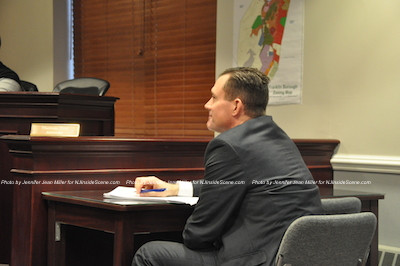 Members of the council all shared their goals for the year, and expressed their good wishes to the new mayor and councilmen. Councilman Joe Limon said one of the goals he was striving for this year was to find ways to lower the residents’ tax bills.

“I think it’s going to be a great year,” said councilman Joe Martinez. “This is a great team we’ve put together.”

Snyder suggested more efforts to build up Main Street in Franklin, while many more recently have suggested the Route 23 corridor is Main Street, he would like to see a shift back to the downtown area.

Alison Littell McHose, borough administrator, said that the group of friends who used to meet at the Franklin Diner, who some of them were descendents of, would be “proudly looking down,” on the meeting and those who have accepted the roles to serve in the positions of leadership with Franklin.

Giordano has suggested his goal is to make Franklin more family-friendly, and to seek out grants, while reducing spending. He said that the council will be plotting out one, three and five-year plans together.

He also thanked the employees of the town, including the staff at the municipal building, the police department, and the DPW.

“Know we’re going to work very hard though we may not always agree on things,” said Giordano.

He said he strives to do the job like the Mayors of Franklin that he had known many years ago, and with hopes to restore a pride in the community.